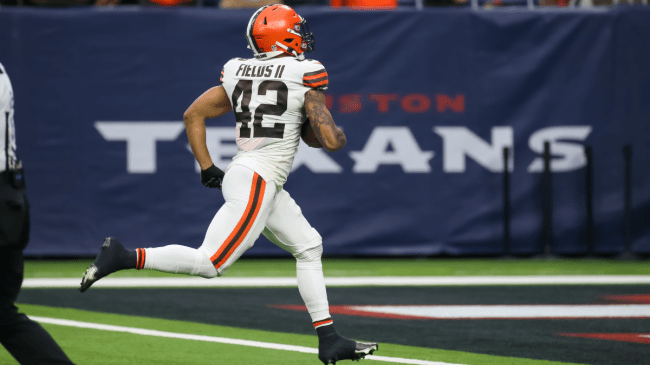 The father of a Cleveland Browns player is going viral for a hilarious celebration on Sunday. Tony Fields, Sr. made headlines for diving over rows of fans to catch a football thrown into the stands by his son.

A clip of the impressive catch is now making the rounds on social media.

It happened in the Browns’ most recent matchup with against Houston Texans. Tony Fields II picked off a fourth quarter pass from Texans QB Kyle Allen and swiftly returned it for a score. The touchdown put his team up 24-8, and to celebrate, he found his dad in the bleachers.

Fields launched the ball in his father’s direction, but unfortunately, if fell a bit short. No worry, Fields, Sr. leapt across multiple fans to haul in the pass. At one point, I think he was crowd surfing.

He then did his own celebration, standing atop the stadium walls in his Cleveland Browns jersey and pointing back down to the field.

At first, not everyone realized that the man was Tony Fields’ father. The Cleveland defender clarified after seeing the clip floating around Twitter, posting a message online.

That “Browns fan” is my pops!

Others quickly commented on the comical catch, posting reactions to social media.

One person said, “Tony Fields’ dad crowd surfacing to get the ball from his son’s pick six is exactly what you needed to see today.” Another fan wrote, “Now that’s a dedicated father.”

Great moment for the father and son in Houston.

Related: Wife of Texans’ owner turns back on Browns’ QB Deshuan Watson in return to Houston