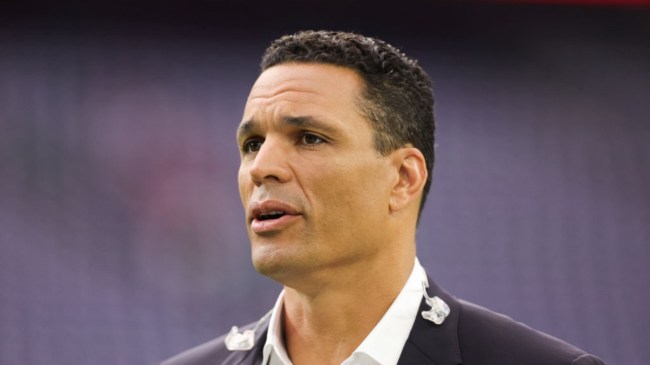 The NFL headed to Cleveland for Thursday Night Football tonight on the first day of Fall. Based on what tony Gonzalez chose to wear during the pre-game show for the matchup between the Cleveland Browns and Pittsburgh Steelers, some might believe that it is much colder there than a fall day in Cleveland.

In fact, he looks like he’s in the middle of the “Endless Night” that the characters in the Game of Thrones universe spent centuries trying to prevent.

Gonzalez is was wearing a pair of gloves and had a blanket on his lap during the pre-game show, a choice that fans have been roasting him for.

Tony Gonzalez, wearing gloves during pregame, looks as if he’s sitting in a block of ice while everyone else on set hasn’t noticed the cool (not cold) weather. pic.twitter.com/2P5kLDAiet

Another pointed out that Gonzalez requested a space heater to deal with the crisp fall air.

Watching this pregame on Amazon, Tony Gonzalez is wearing gloves, literally has a blanket on his lap and Charissa Thompson said he requested a space heater.

This fan also wasn’t impressed with his decision to wear gloves.

There could be an explanation for the wardrobe choice from Tony Gonzalez. Tony G maddest clear pregame that he believes the Steelers should be preparing to turn to Kenny Pickett if Mitch Trubisky doesn’t start playing better.

Tony Gonzalez would rather see any guy named "Kenny" play over Mitch Trubisky.

Pickett famously wore a pair of gloves when playing QB in college, so maybe this is a way for Gonzalez to support the quarterback he believes should be starting for the Steelers.