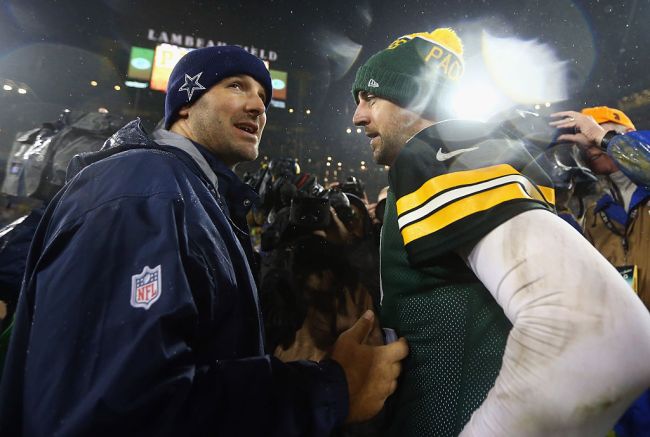 People aren’t happy with Tony Romo over his comments regarding Aaron Rodgers on Sunday.

Before this week, Rodgers had been at the center of controversy after people felt he misled people about his vaccination status when he said he was “immunized.” While speaking to the media on Tuesday, Rodgers said he took full responsibility if people felt misled by his actions.

Rodgers: "I misled some people about my status. I take full responsibility for those comments but in the end I have to stay true to who I am and what I'm about. I stand by the things I said."

Adds he has empathy for those impacted by the pandemic.

During the Seahawks-Packers broadcast, Romo appeared to take a sympathetic tone while reporting on the Rodgers situation when he said that he was glad the star QB took responsibility when people felt he misled everyone about his vaccination status.

“I’m glad he did that; I’m glad he took responsibility for that. I’m glad that he said that he misled people…and I think the biggest thing, you know it’s a polarizing issue, but I can promise you he felt the weight of it the last few weeks, it’s something that he’s not thinking about anything else, and it’s been, make no mistake, a very challenging week for him”

Some viewers felt Romo was letting Rodgers off the hook with his comments.

Ummm No Tony, Aaron Rodgers did not take responsibility.

Listening to Jim Nantz and Tony Romo explain the Aaron Rodgers situation was embarrassing and another example why we shouldn’t expect network broadcast crews to properly discuss controversial issues related to the sport and League that they cover.

I can’t belive @CBS has their commentators Jim Nantz and Tony Romo on air literally doing PR and image rehabilitation for Aaron Rodgers. Y’all can’t be serious. They dedicated an entire 5 minutes praising Rodgers for his nothing ass statement. What a sham. @CBSSports #SEAvsGB

Did Tony Romo just make Aaron Rodgers out to be the victim?

It's early in the broadcast, but Jim Nantz and Tony Romo don't appear to be committed to being critical in any fashion about #AaronRodgers and his off-the-field behavior.
I'm not surprised.
We'll see if anything changes as the game moves along.#GBvsSEA #NFLonCBS#NFL

@tonyromo You just said you were glad that @AaronRodgers12 came out and said that he misled everyone. That’s the opposite of what he said. You’re great in the booth, but if you can’t talk about the shitstorm Rodgers caused himself with any objectivity then don’t talk about it.

@Realrclark25 As it relates to the Aaron Rodgers situation, Tony Romo and Jim Nantz sounded like lawyers trying to convince the jury that their client is innocent when the client is caught on high def 4K camera robbing the bank.