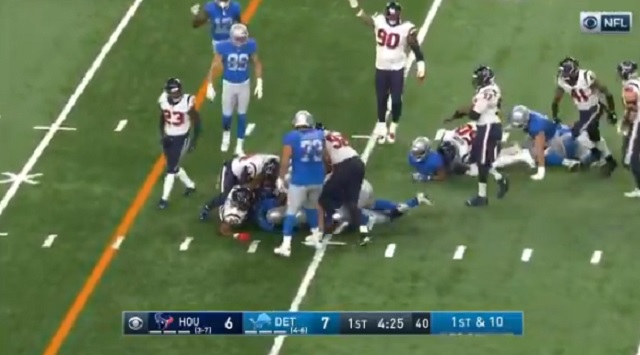 Tony Romo is doing that weird freaky thing where he predicts plays before they happen.

In the first quarter of the Houston Texans-Detroit Lions Thanksgiving Day game, J.J. Watt picked up a pick-six for the Texans. After the play, Romo and play-by-play man Jim Nantz talked about how the Texans haven’t forced many turnovers this year.

On the Lions’ next possession, Romo commented that turnovers “come in waves” about a second before the Texans forced a fumble.

NFL fans were amazed at Romo’s ability to predict the turnover before it happened.

Tony Romo honestly might be able to the see the future. Literally called the fumble a second before it happened.

Tony Romo watching all these turnovers after saying they come in waves pic.twitter.com/SCbqnbnMdL

tony romo talking about the texans D getting their first takeaway in a first half of a game, says sometimes they come in waves, next play texans recover a fumble. the guy can see the future.

Texans get pick 6. Jim Nantz notes that Texans hadn’t gotten a 1st half turnover this year.

Tony Romo: “they come in waves.”

Tony Romo is the best analyst I've ever heard predicting what will happen in a game. But him saying that "takeaways come in waves" literally a second or two before Texans generated their second takeaway against the Lions was absolutely amazing.