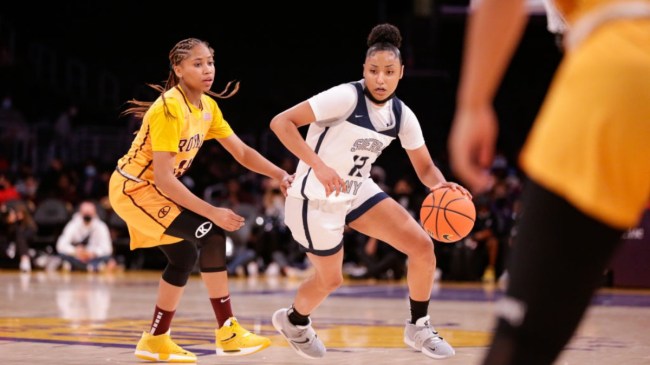 When Sierra Canyon basketball is in the headlines, it is usually because of Bronny James or any of the other sons of former NBA players on their boys basketball roster. However, there is actually an even more high-profile recruit playing basketball for the school.

Juju Watkins is the top recruit in girls basketball and is in her senior year of high school. With the college basketball world waiting to learn where she will play next season, a report has revealed that she has narrowed her choice down to 3 schools.

ESPN’s Charlotte Gibson released a profile on Watkins today and revealed that she is choosing between South Carolina, Stanford, and USC.

Juju Watkins has narrowed her choice down to USC, Stanford, and South Carolina

She has signed with Nike, appeared in a commercial with LeBron and Bronny and autographed a fan's face with a Sharpie.

The No. 1 recruit in high school girls’ basketball, who received offers from countless schools and narrowed her choices to South Carolina, Stanford and USC, has been the source of buzz emanating across the country for months, years. With a game so big, so strong, so versatile, so skilled, she has drawn fans, scouts, coaches and pros to her orbit. Last season, the 6-foot-2 phenom was asked to autograph a fan’s face with a Sharpie. Last summer, she practiced with James Harden and Kevin Durant. Last month, she signed a deal with Nike and appeared in a commercial with LeBron James and her classmate and friend, Bronny.

Wherever Watkins ends up, she will be one of the most exciting players in all of college basketball to watch after averaging over 20 points and 10 rebounds per game last season and she’ll surely have some memorable March moments over the course of her career.