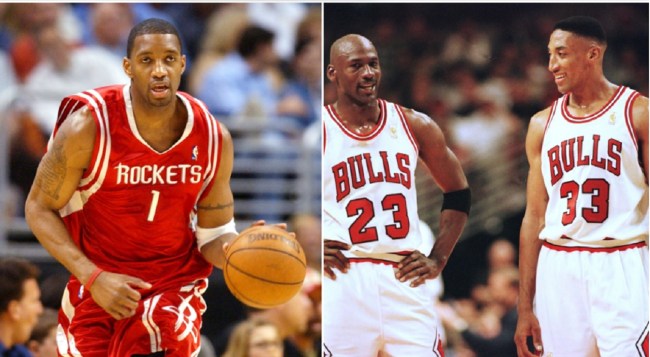 Tracy McGrady admits that if the Chicago Bulls had traded for him in 97/98, the team wouldn’t have won a championship that year.

During an episode of The Jump a few years ago, McGrady revealed that Bulls GM Jerry Krause had told him that he was intent to trade him for Pippen, but Michael Jordan eventually prevented the deal from taking place.

“You know what a lot of people don’t know about that night is that Jerry Krause was actually trying to make a trade for me and Scottie Pippen. MJ called and axed that whole deal.

“Jerry Krause was trying to make a trade for me that night and Scottie Pippen. They brought me in for a secret meeting.”

We asked McGrady what would have happened if the trade had gone down, and he believes the Bulls wouldn’t have won a championship in 98 with him because he was so young and inexperienced at the time.

“The thing is I was 18 years old I was a rookie, I wasn’t what everyone saw me as or the player that I became, so no. Would have that been a smart trade for the Bulls, I don’t think so because they were winning championships at the time, and you’re trying to trade a top 50 guy for a rookie? In the long run, yes, that would have worked out for them, but short term? No”.

Earlier this week, Bulls owner Jerry Reinsdorf revealed that it was his decision, not Jordan’s, to veto the Pippen/McGrady deal.

“We had won five championships at that point, and Krause came to me and said: ‘Look, I’m not sure I can guarantee — I don’t know how strong I feel about winning a sixth championship. But I have a chance to trade Scottie Pippen to the Boston Celtics for two very high picks (No. 3 and 6 in the 1997 draft),’ “And Krause, if we had done that deal, he was going to take Tracy McGrady and he was gonna take Ron Mercer.

“I thought long and hard about it, but my decision came down to this: ‘What would our fans want us to do?’ And I concluded that our fans would want us to win a sixth championship, even if it meant we weren’t going to be that good afterwards. And that’s why I vetoed the trade. I never heard from Michael Jordan about it. If Krause heard anything from Michael Jordan, he would’ve had to have told me about it.”

The Bulls went on to win the championship in 97/98 with Pippen so it seems like the team did make the right decision.