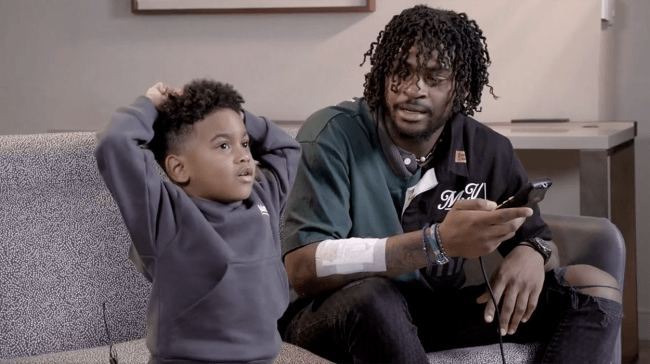 Aaiden Diggs is once again stealing hearts. The four-year-old son of Dallas Cowboys cornerback Trevon Diggs has gone viral a few times this year and for good reason. His most recent moment of stardom might just be his most adorable yet.

Earlier this year, Aaiden got to meet his favorite quarterback, Dak Prescott. However, Diggs was flustered by the moment and called him Patrick Mahomes instead of, well, Dak Prescott.

Cowboys DB Trevon Diggs' son, Aaiden, got to meet his favorite QB Dak Prescott and it was adorable ❤️ 😅

A few months later, he was filmed cheering on his father from the stands. His advice was to “believe in yourself,” to “make sure you do good,” and to “break those ankles.

He also made himself very clear that he wants his dad to “make the money” because “we want the money!” It was an incredibly wholesome moment from a young man who is extremely gregarious for his age.

We can’t get enough of Trevon Diggs’ son Aiden cheering him on. 😍

During an interview with the family, he was declared to be the biggest personality in his family, along with his uncle Stefon. Aaiden then went on to mimic both his dad and uncle’s warmups and had the attention of everybody in the room, as he normally does. He also managed to get Dak Prescott confused for Patrick Mahomes, again.

In the most recent viral Aaiden moment, he is breaking down film with his dad.

Trevon ran through the tape while Aaiden broke down the plays and mimicked his touchdown celebrations. Aaiden made some hilarious comments along the way, but the most amazing moment came as the two watched videos of Lamar Jackson.

Aaiden, no matter how hard he tried, could not get Jackson’s name right. It’s the most adorable thing that you’ll see today.

The more Aaiden Diggs that is in our lives, the better.