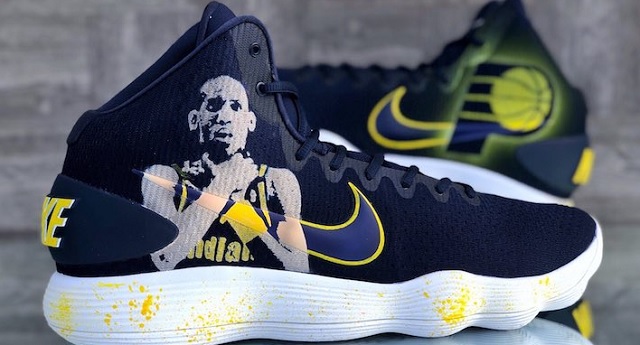 Shoe Customizer Salvador Amezcua better known as his online persona Kickstrodamis has made a name for himself for his custom sneakers that have been worn by dozens of high profile athletes in the past few years.

Yesterday, Kickstradomis showed off his latest masterpiece on Twitter. Check out these Reggie Miller inspired sneakers he made for Pacers’ Trevor Booker.

Booker and Amezcua spoke with VigilantSports about how the “Reggie Miller” sneakers came to be.

First, Booker wanted an X-Men design. But then he had something special up his sleeve for the postseason. And because these players wear large sizes and often receive special shoes, it’s best for the players to have shoes shipped to Amezcua’s Los Angeles residence.

“I just thought it would be cool to put some characters on my shoes,” Booker said. “I asked the other guys if they wanted some. I can’t wait for my playoff shoes.”

I’m not even a Pacers fan but I would most definitely rock those sneakers.