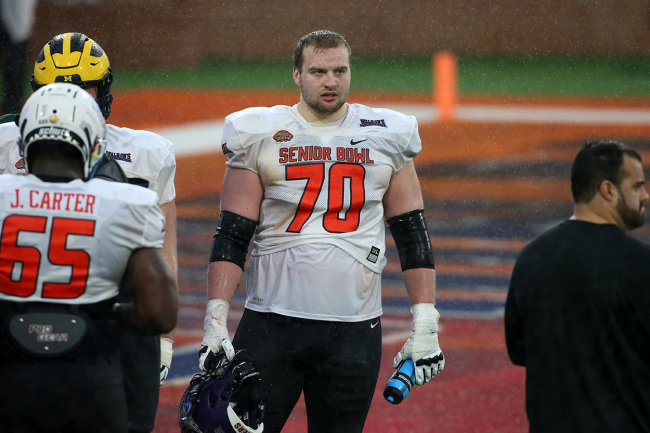 Trevor Penning is an absolute menace. The 23-year-old offensive lineman consistently chooses violence and often angers his opponents in the process.

At 6-foot-7, 329 pounds, Penning is a very, very large person. He played his college football at Northern Iowa but quickly skyrocketed up NFL Draft boards throughout the All-Star circuit as his dominance during the regular season translated to better competition.

As a result, with the No. 19 overall pick in the 2022 NFL Draft, the New Orleans Saints selected Penning. He will be a big part of the team’s offense right away and is expected to slide right into the starting lineup.

However, he is already causing problems. Throughout his entire career, Penning has been an agitator. The Iowa-native is a pest who consistently plays all of the way through, and often after the whistle, burying his blocks into the ground and driving them into the turf.

Well, nothing has changed over the first week of NFL training camp. Penning is already pissing off his defensive teammates with his tenacity and brutality.

After starting three fights in three days, Penning was kicked out of practice on Wednesday. It comes as a surprise to no one who knows him and his play.

A pre-draft quote about why Trevor Penning loves football makes it all make sense.

Needless to say, Penning is crazy— but for football, that’s not a bad thing. And as Shawne Merriman pointed out, it’s something that will serve him well come the regular season, even if it means he gets under his teammates skin during training camp.

They will love him on gameday that’s all that matters https://t.co/GLZDXK2FTb