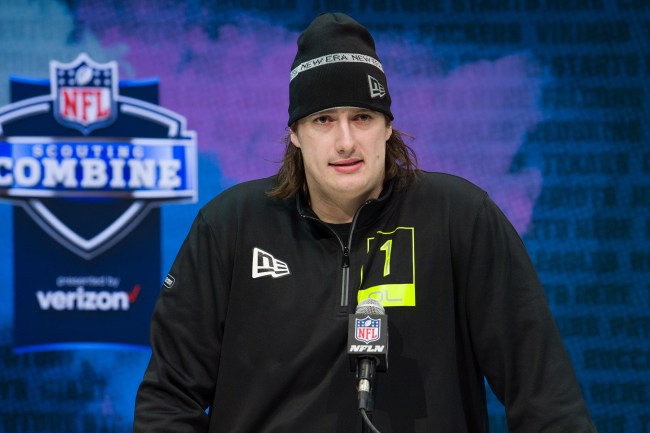 A video of Washington standout Trey Adams answering a question at the NFL Combine was leaked on Twitter over the weekend. In the video, Adams is asked “if you could change anything about yourself, what would it be?”

Adams took a second to think about his answer and then blurts out that he wants a “bigger dick.”

Trey Adams with the best answer ever to a combine question pic.twitter.com/AvGI9uOPFg

Pro Football Talk confirmed the video was legit and that someone on the combine staff probably leaked it.

In a video that, per a league source, reflects a Q&A conducted by Combine staff and not by any specific team,

As the source explained it, teams usually don’t get the interviews conducted by Combine staff until next week. Teams assign Combine workers (usually, younger scouts), and someone working with the Combine let it out.

Former NFL exec and NFL media analyst Gil Brandt was not happy with the leak and is calling for the league to investigate.

I hope the person who leaked the Trey Adams video is found out and punished to the fullest extent. These are supposed to be confidental meetings. Not fair to Adams or the process. Both players and teams rely on this confidentiality to have honest discussions. #NFLCombine

Not cool by whoever leaked the video on Trey Adams. That was meant to be seen by only members of all 32 teams. Totally not cool.

At the end of the day the video was hilarious and Adams is now a fan favorite for his combine answer.