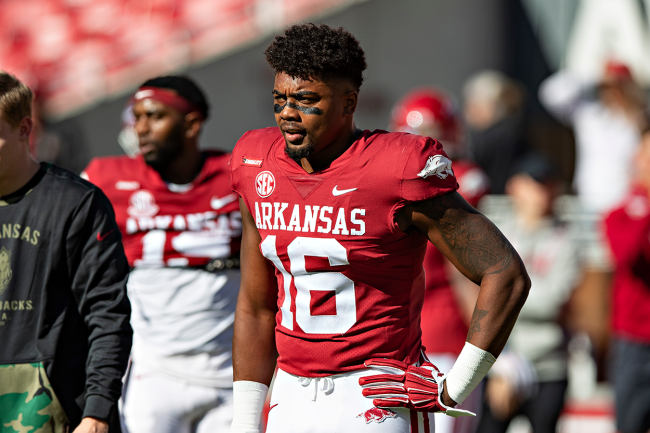 The biggest move of the 2022 NFL Draft came between the Titans and Eagles. After months of back-and-forth between A.J. Brown and Tennessee, the team chose to trade him to Philadelphia and drafted Treylon Burks with its first overall pick.

Burks, a 22-year-old out of Arkansas, has often been compared to the player that he was drafted to replace. They are of similar size and they play with the same tenacious attitude, as well as comparable speed and ability to get open or make plays in traffic.

On Friday afternoon, the Titans put their first rounder to work for the first time. Tennessee opened its rookie minicamp on a cloudless, 85-degree day in Nashville that felt closer to mid-90s with the humidity and sun beating down.

A look at Treylon Burks during inside period for the #Titans pic.twitter.com/YZKZdhUAaf

Not long after getting onto the field for his NFL practice, Burks needed a break. He was struggling to get his breath during individual position drills and had to head back into the team facility.

One of Treylon Burks’ final reps during individual drills before he went inside, looking like he was having some trouble breathing. pic.twitter.com/JcN1ojTZp6

Burks eventually came back out during 11-on-11 work later in the day, but was unable to stay on the field for very long. His very limited first practice with the Titans ended early.

Treylon Burks didn’t make it through the first WR drill. Was hunched over early. Went into new building with trainer. Was using an inhaler. Came back out, did a couple reps, later went in. #Titans. pic.twitter.com/mXSWMZnARR

After Burks and the Titans’ practice wrapped, head coach Mike Vrabel was quick to move on from the topic, but offered an interesting perspective on why his rookie receiver may have been struggling.

“It’s hard to think they can create with a trainer how we do things… it’s just different,” he said. “They’re working, they think that they’re trying to get in shape, but that’s just not the case.”

Based on what Vrabel said, the expectation is that Burks will be back on the field tomorrow for Day 2 of rookie minicamp. Whether that proves to be true or not, it looks like the former Arkansas pass-catcher has some work to do before he is ready for the NFL level. Fortunately, he has plenty of time to get right.