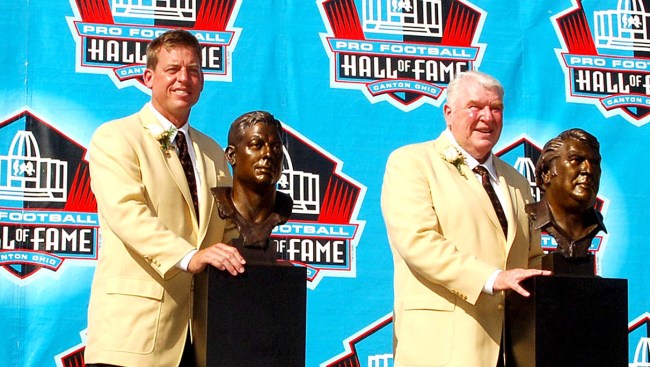 Way back in the year 2006, two notable and related things happened: Troy Aikman and John Madden were both inducted into the Pro Football Hall of Fame, and Americans were on the verge of officially sending more texts than they made phone calls.

How could those two things possibly be related? Until today, I would have said that they are not. I would have been wrong.

In a profile published on Wednesday, former Dallas Cowboys quarterback Troy Aikman shared a great story about how back in 2006 he was the person who introduced NFL legend John Madden to the world of texting.

When discussing his favorite Madden moment, Aikman flashed back to 2006, when the two were inducted together in the Pro Football Hall of Fame.

At the event’s luncheon, Hall of Fame honorees were asked to wear the same colored golf shirt, and unsure of which color to wear, Aikman sent Madden his first text message ever. But Madden’s response was delayed for a good 15 minutes.

“All of a sudden, my phone lights up, and he texted me back and told me [the shirt color],” Aikman said. “I saw him 30 minutes later, he told me, ‘I didn’t know what the hell that was. My phone lit up, and I got these words on there. What do you call that?’ I said that’s texting.

“I’m dying laughing as he’s telling me this story,” added Aikman: “That was his greatness – he can take something that was pretty mundane for most people and turn into a really entertaining moment.”

Aikman, who is currently promoting the launch of his new beer brand Eight, also revealed what John Madden thought was the best day and time for a football game.

After Madden retired from broadcasting in 2009, Aikman said, “in conversations that I’ve had with him, he always felt that the best time for NFL football viewing was Sunday afternoon at 4:20 Eastern Time. I think there’s a lot of truth to that – it feels good.

“Sunday afternoons, I think that’s when people are used to really gearing in and watching the big game.”

He’s probably not wrong. From Madden and Pat Summerall to Joe Buck and Aikman, it’s been pretty hard to beat late afternoon Sunday games on Fox since 1994.

Was dope speaking with @TroyAikman yesterday about his new beer company EIGHT… a key piece of the business plan is distribution … asked Aikman about landing his beer in @HEB which is arguably the best supermarket in America .. certainly in Texas#Sports #Business #Cowboys #NFL pic.twitter.com/FXzSOsPp1g

It was also a career move by John Madden that led Aikman to becoming part of that number one NFL broadcasting team on Fox.

In 2002, as he was gearing up for his first season working for Fox, John Madden called him to let him know he was leaving the company and his old Sunday afternoon time slot to go do Monday Night Football.

“I couldn’t believe it,” Aikman recalled. “And then the very next year, all of a sudden, I was working in the number one booth.

“I think one of the reasons why he left was at that time, I think he was interested in working a prime time game on Monday Night Football. That was unique, and the only time there was a prime time game.”