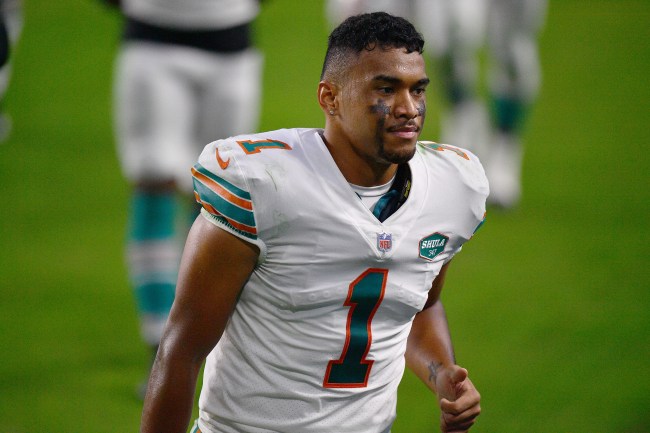 Dolphins rookie QB Tua Tagovailoa got humbled on Sunday by the Denver Broncos.

Earlier in the week, a confident Tua remarked that he expected his transition to the NFL to be “a lot harder” after he won his first three games fairly easily.

I expected it to be a lot harder’ “Not that it’s not hard.”

“I would say I’m comfortable, but a lot of that starts from practice. Just being able to talk with our center, Ted (Karras), on Thursdays, going over our protections, just being able to talk to the O-line about what I’m thinking and then hearing from them what they’re thinking, talking to the receivers, what we’re thinking, and just kind of a combined thought process for all of us together to all kind of be on the same page.”

On Sunday Tua went 11-of-20 passing for 83 yards and a touchdown through three quarters before getting benched for Ryan Fitzpatrick.

Dolphins head coach Brian Flores spoke about his decision to sit his young QB in the fourth quarter while his team was down 10 points.

“Tua wasn’t injured. We just felt like it was the best move at that point of the game. We had to get in two-minute mode, and we felt like [Fitzpatrick] gave us the best chance to win the game, and we had an opportunity at the end to tie it,”

Despite not playing well, Tua seems to be taking getting benched in stride.

My thoughts were whatever was going to be best for the team. When I was in, we couldn’t really get things going,” Tagovailoa said. “Coach felt like it was best to put Fitz in to give us a spark. When I heard that, it was really what’s best for the team. If we were to win with Fitz in there, the locker room would be different. Everyone would be a lot happier. It just sucks to lose.”

“For me, it was a great learning experience,” Tagovailoa said. “I felt like I was holding the ball a little too long. Just got to get completions and get the ball in the hands of our guys to make plays for us.”

Hopefully, this is a good learning lesson for the rookie QB as the Dolphins hope to make a playoff push in the second half of the season.