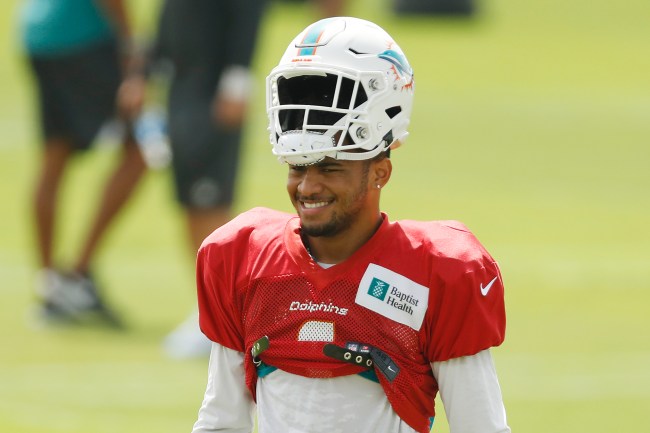 It’s no secret that the Miami Dolphins desperately need a wide receiver to help ease the pressures on Tua Tagovailoa and allow the offense to take that next step. Lucky for Miami, this year’s draft class is loaded with top-notch wideouts including one that Tagovailoa is very familiar with in DeVonta Smith.

With the Dolphins holding the No. 3 pick courtesy of the Texans, there’s a real possibility we could see Smith and Tua team up in south Florida, and the two former Alabama stars know it.

Smith, the first wide receiver to win the Heisman since 1991, shared that he’s had some conversations with Tagovailoa about a possible reunion in Miami and how it would be nice to run it back at the next level.

“We just talked about it would be nice to run it back again,” Smith told NFL Network after Tuesday’s practice at the Senior Bowl. “Not too much, but somewhat talked about it.”

DeVonta Smith and Tua run it back in Miami?

A Tua-Smith one-two punch has the potential to be rather deadly and you would think that if Smith is sitting there at No. 3 the Dolphins would be very intrigued at calling his name. Not only is he one of the best playmakers in college football history, but he’s also familiar with Tagovailoa which could speed up the development process.

The Dolphins may have some competition when it comes to drafting Smith, however, as the Jets hold the No. 2 pick and could very well draft Smith to become a weapon for Sam Darnold. LSU’s Ja’Marr Chase is considered by many to be the top wide receiver in the draft class as well and Miami, or New York, could rate him higher as Smith as well.

With Tagovailoa taking over the Alabama program during the 2018 and 2019 seasons, Smith caught 110 passes for 1,949 yards and 20 touchdowns.