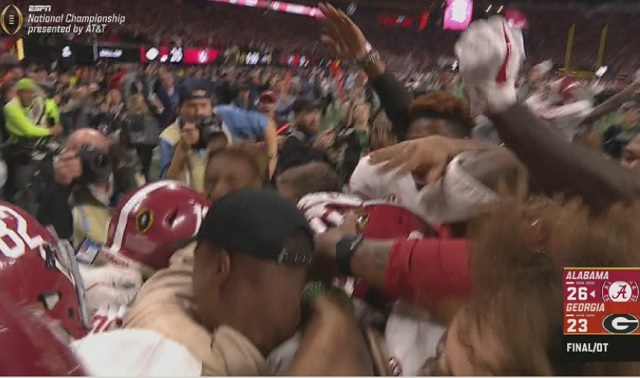 In one of his first plays from scrimmage Tua busted out an incredible scramble play and you knew from that point that he was going to be special.

Tua Tagovailoa has been in for like three plays and he's already my favorite college football player pic.twitter.com/FPy4PTlMNr

When the Tide were down a touchdown late in the fourth quarter Tua capped off an amazing game-tying drive with a beautiful pass to Calvin Ridley on 4th down.

This is the type of throw that you only see in movies. My God pic.twitter.com/zPkafDAv2W

And then we have this absolutely gorgeous throw by Tua in overtime to give Bama and Nick Saban another national championship trophy.

The freshman from Hawaii had played in seven games this season, completing 35 of his 53 passes for eight touchdowns and one interception.

Before the start of the season Tagovailoa wasn’t worried about competing for the starting job with Jalen Hurts.

Hurts is going to have look for another school to play for because Bama is Tua’s team from here on out.