Tua Tagovailoa Will Miss Remainder Of The Season With Hip Injury, Per Report 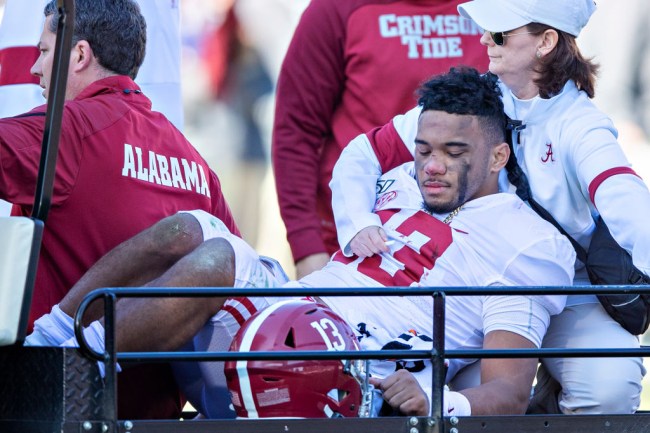 The scene late in the first half in the Alabama – Mississippi State contest on Saturday afternoon was a tough one. With the Crimson Tide up four scores, Tagovailoa took a tough, awkward shot from Mississippi State defenders, came up bloody and was carted off of the field.

It was quickly reported that it was a hip injury for Tua and now, as first reported by Aaron Suttles of The Athletic, he will miss the remainder of the season with a dislocated hip and posterior wall fracture.

Breaking News: Tua Tagovailoa is out for the season with a dislocated hip with a posterior wall fracture, a person with knowledge of the situation tells me.

Tagovailoa, a junior, is towards the top of every NFL mock draft board for the 2020 NFL Draft and with this injury, we could have seen the last of Tua at Alabama.

He entered Saturday’s contest as a game-time decision as he’s battled ankle injuries for the majority of the season. Prior to the drive he was injured on, it appeared as if he asked Saban to put him back into the game for one final go of it before pulling him for the rest of the game as Bama was up 35-7 at that point of the game.