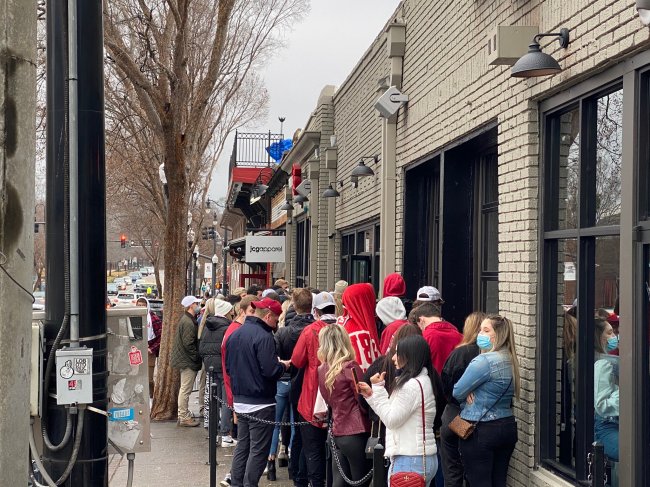 It is 42 degrees and damp in Tuscaloosa, Ala. but that didn’t stop University of Alabama students from securing a spot in line at their favorite bars ahead of Monday’s National Championship game. The kickoff between the Crimson Tide and the Ohio State Buckeyes was scheduled for 7:00 p.m. CST, but the city’s main downtown area, called “The Strip,” started opening its doors at 11:00 a.m. to lines that were already hundreds of students deep.

Bars in Tuscaloosa are PACKED ahead of tonight's National Championship game. The Yellow Hammers are flowing and kickoff isn't until 7pm CT.

Tuscaloosa Mayor Walt Maddox urged fans to enjoy the game at home and celebrate accordingly, with concerns surrounding COVID-19, but the celebration continued. He told fans to “wear a mask, practice social distancing, adhere to laws and regulations that have been put in place by the state.”

In the upcoming days around the National Championship Game, we all have a role to play in keeping our community safe.

Please continue to follow @ALPublicHealth guidelines including wearing a mask and limiting gathering size as you cheer on the Tide. Thank you and Roll Tide! pic.twitter.com/OzXZDJMQEu

Part of the reason for Monday’s lines were because of limited capacity and regulations on the number of people allowed in the bar at one time. As crowds moved in and out throughout the day, the lines only seemed to get bigger.

Twelve 25 and Gallettes are the two most popular bars in the city and each bar took advantage of the high-demand and charged massive prices just to get in. The cover charge at Gallettes reached $100 by four o’clock in the afternoon while Twelve 25 was heard to have been charging upward of $250 for entry. To make things even more exclusive and lucrative, neither bar was “pre-banding,” which is the act of getting an entry wristband, leaving and coming back to that same bar later on. If you’re in, you’re in — if you’re out, you’re out.

I think it’s safe to say the crowds on The Strip and in downtown Tuscaloosa ahead of tonight’s national championship game have been steadily growing since this morning. pic.twitter.com/UGPpPMsmH6

With cover being at least $235. 1225 is about to make coin. Look at this line pic.twitter.com/mYMocnLl7a

LARGE CROWDS GATHER IN TUSCALOOSA AT BARS: large crowds of fans are waiting in long lines at bars on the strip trying to get seats inside to watching tonight’s college national championship game pic.twitter.com/x9f1Dawp8c