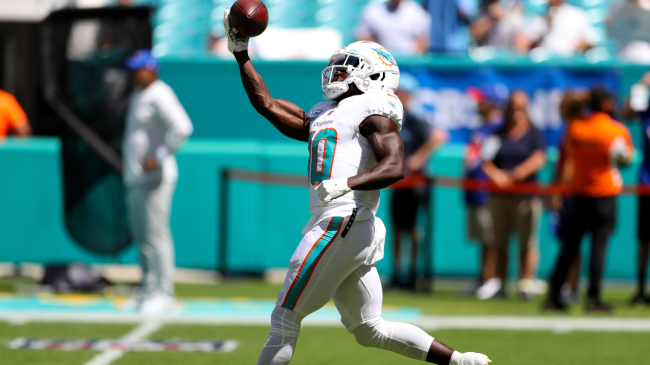 Tyreek Hill finally admitted that Tua Tagovailoa was not the reason for his choosing the Dolphins over the Jets this past offseason.

Hill, a star with Kansas City, opted to move on from the Chiefs after the 2021 season. He accepted a huge deal with Miami worth $120M over the next four seasons. Of that, $72M is guaranteed.

But there were reports that the New York Jets offered a similar deal, and that Hill rejected.

One reported reason for that denial was Hill’s desire to play with passer Tua Tagovailoa, who he called “the most accurate quarterback in the NFL.” That idea was met with initial skepticism from fans.

Hill has doubled down on those comments as the season’s trekked on, and he and Tua have proven many of their haters wrong through the first four weeks of the year. The Dolphins are 3-1, boasting one of the most explosive offenses in the league.

But even with that recent success, many don’t think the pass catcher believes his own words about Tagovailoa’s accuracy. Fans now have the true reason for Ty Hill’s choosing the Dolphins over the Jets.

Ty Hill explains why he chose Miami over New York

Hill had the option of playing with either Tua or Zach Wilson, who many believe to be a potential star in New York. Hill and Tagovailoa have created a dominant duo, but he could’ve been equally as explosive in the Jets’ offensive attack.

On Monday, he finally revealed his reasoning for choosing the Dolphins over the Jets, and it has little to do with quarterback play.

Tyreek Hill on why he's a Dolphin and not a Jet right now: "State taxes."

When talking on why he’s a Dolphin and not a Jet, Hill referenced “State taxes.” As everyone knows, the state of Florida doesn’t have income tax. New York and New Jersey (where the Jets play) do. Playing in the Sunshine State allows him to keep a great deal more of that $120M payday.

“It was very close to happening. It’s just those state taxes, man. I realized I had to make a grown-up decision. Now, here I am in the great city of Miami.”

It has nothing to do with playing with Tagovailoa, or any other quarterback for that matter. Hill said later in the press conference that it doesn’t matter who’s under center, he’ll put up numbers.

How confident is Tyreek Hill that he will be able to produce with Teddy Bridgewater at QB?

He looked me dead in the eyes and said: "I'll put up numbers with YOU"

Can’t say we blame him, and it certainly appears to be working out in Miami so far. The Jets will see what they missed out on when the Dolphins come to town this Sunday.