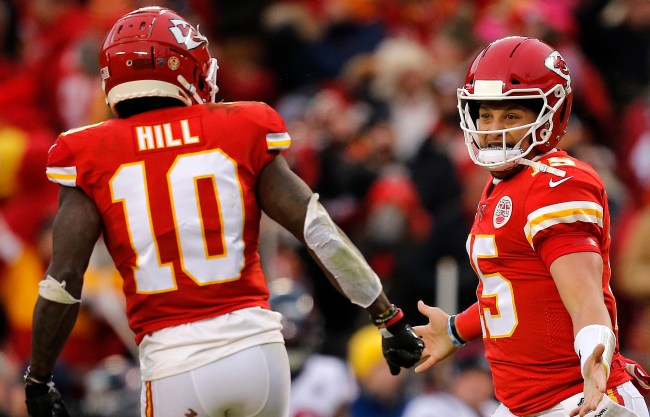 Over the summer, Patrick Mahomes inked a 10-year, $477 million deal with the Chiefs—the largest contract in the history of sports—due largely to the fact that he’s spent his first few years in the NFL proving he’s really, really, really, ridiculously good at football.

The quarterback’s technically kicked off his professional career after the team picked him up with the 10th picked in the 2017 draft but only started a single (and essentially meaningless) game during his rookie season. However, after taking the reins from Alex Smith the following year, he led the Chiefs to the AFC Championship while securing MVP honors and followed up that campaign by playing a pivotal role in bringing the Lombardi Trophy back to Kansas City for the first time in 50 years.

It seems like Mahomes can do basically anything but he hasn’t obviously been able to achieve what he has on his own, as he’s been surrounded by a squad of talented teammates—including Tyreek Hill, who recently shared he was very skeptical of the Texas Tech alum after seeing him practice for the first time to a point where he wondered if the Chiefs had wasted a draft pick on the man has who’s cemented himself as the most talented quarterback in the league over the course of about three seasons.

During a recent appearance on Inside the NFL, Mahomes’ trusty wide receiver was asked about his first impressions of the quarterback and wasn’t afraid to admit he “thought he was trash” after watching him showcase his talents (or lack thereof) during his practice debut.

“I thought he was trash. I ain’t gonna cap.” @cheetah's first impression of Mahomes is comedy 💀 @brgridiron

He’s obviously changed his tune a bit since then, but Mahomes still chimed in to jokingly express his surprise after the clip started to make the rounds.