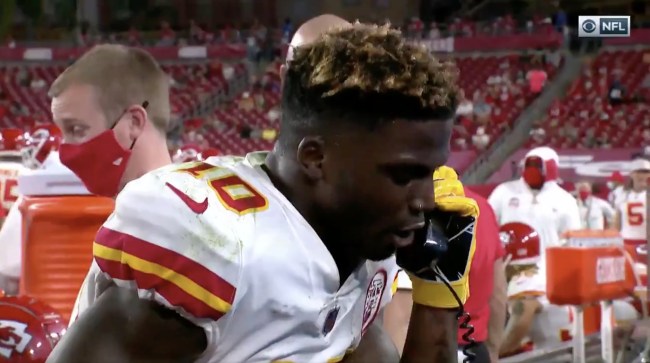 Kansas City wide receiver Tyreek Hill had himself a Sunday against Tampa Bay. The dynamic playmaker they call “The Cheetah” went for 203 yards and two touchdowns in the first quarter. On his first touchdown, he threw his signature peace sign celebration as he crossed the goal line.

He took it up a notch with his second and backflipped into the end zone. Later in the game, Tyreek the Freak broke another one and added to his total. He finished the 27-24 win with 269 (nice) yards and three touchdowns on 13 catches. After a big play in the second half, Hill walked over to the bench and called for backup. Not for him, but for his opponents. Rest assured, he told fans, help was on the way.

This, of course, was first done by Shannon Sharpe when his Denver Broncos took a big lead over the New England in 1996. In the original instance, the Hall of Fame tight end grabbed the bench phone (used for players to communicate with the booth) and said he was calling the president with a request for the National Guard because they were “killing the Patriots.”

Quarterback John Elway and Denver beat their easterly opponents (who finished the year as the Super Bowl runners up at 11-5) 34-8 in the game and Sharpe had three catches. On Sunday, the script was flipped.

Hill had a great day and sealed it with the game-winning first down catch with just over a minute left, but the score came down to the wire. Patrick Mahomes and Kansas City move to 10-1 with the win while Tampa Bay and Tom Brady fall to 7-5. The two quarterbacks are now 2-2 in all-time meetings.