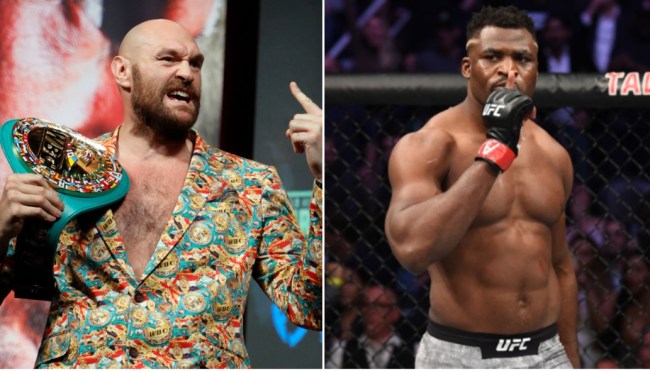 Earlier this week, Ngannou, who is currently negotiating a contract extension with the UFC, said that he wants to box Deontay Wilder or Tyson Fury in the near future.

“It’s always been down the line. This is something I’m not taking my eyes off of. It’s gonna happen, either way. Even if, when the UFC and I finalize a deal, the boxing part has to be into it because I can’t see myself retiring without boxing,”

“Tyson Fury, Deontay Wilder. I would like to test myself to that level.

“It’s not the same sport, although I’m the champion, I’m in the top in this division. At the end of the day, it’s just about like trained hands, trained punches, having a good delivery system to produce bombs, and I’m sure that if I deliver my own punch, it’s pretty good, I can make some damage.”

Fury saw those comments and is now proposing a boxing match against Ngannou in which both fighters would wear UFC gloves.

Who would like to see me fight this beast boxing rules @ufc gloves?@danawhite @francis_ngannou pic.twitter.com/xONNoT8NzR

The two are now going back and forth on social media.

you want to come in to my world calling me & wilder out to a boxing match. what i can guarantee you would be knocked out & also paid your highest purse to be so! so have a think 🤔 https://t.co/JtOgcydYCJ

After I handle business on Jan. 22 I'll fight you under any special rule set you want. In a ring, an octagon or a phone booth. https://t.co/twRhBnFwwH