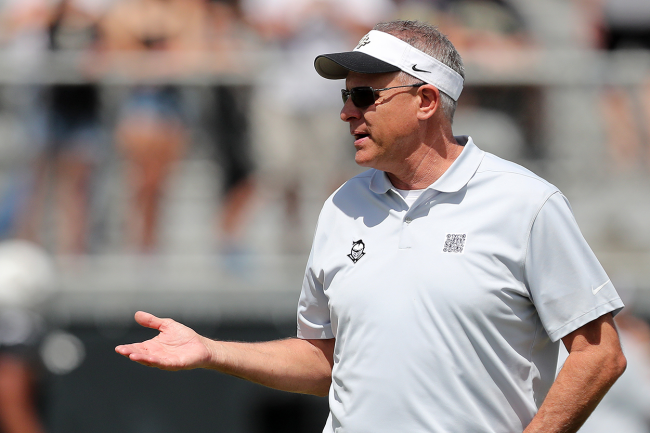 After Gus Malzahn went 9-4 with a bowl win over Florida in his first season at UCF, there is a lot of pressure on the Knights to continue the trend of success in 2022. As a result, fall camp is extremely important and there is a lot of intensity around each and every moment.

To break up some of the seriousness, the UCF coaching staff held a dance-off during a team meeting earlier this week. It served as a great reminder that football is supposed to be fun and it also brought back a hilarious video from Malzahn’s past.

Malzahn wanted his team to know how talented that the staff really is and introduced the dance-off to the delight of his players. And then things got underway.

To close out the evening, co-defensive coordinator David Gibbs brought a special guest into his act, kind of. Gibbs pulled up an old video of Malzahn break dancing to MC Hammer’s ‘U Can’t Touch This’ during his time as a high school coach in the late ’90s or early 2000s.

Malzahn’s breakdancing is extremely cringeworthy, and Gibbs tried to mimic his head coach’s every move during the dance-off.

Take a look at the entire UCF football coaches dance-off in all of its glory:

UCF football could be very good this year, and if the culture in the locker room is any indication, the team is full of camaraderie.