UCF Quarterback McKenzie Milton Has Entered The Transfer Portal Two Years After Almost Losing His Leg, And It’s Impossible Not To Root For Him 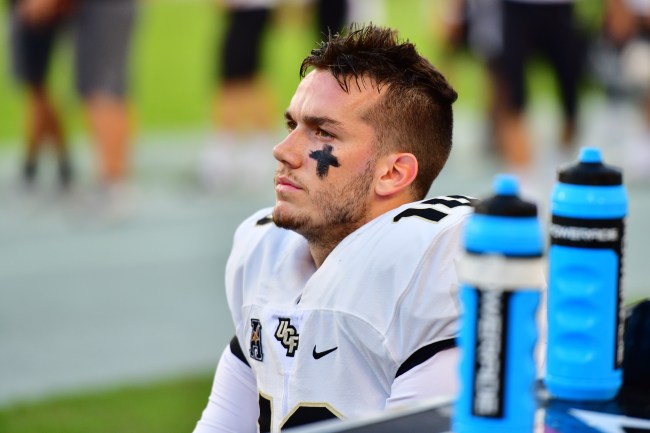 UCF quarterback McKenzie Milton announced on Thursday that he has entered the transfer portal with one year of eligibility remaining, ending a five-year career with the Kinghts. The decision comes just over two years after suffering a gruesome leg injury on Nov. 23, 2018 against South Florida. 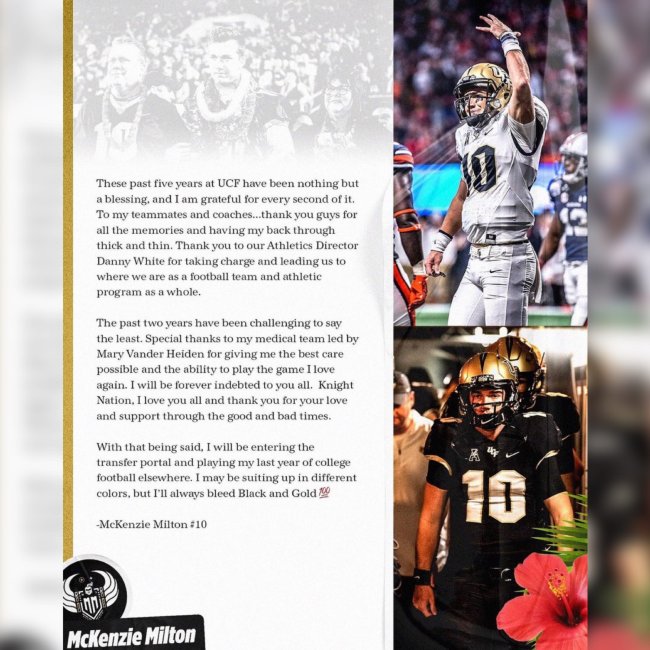 Mitlon has not played a competitive snap of football since dislocating his right knee and suffering ligament, nerve and artery damage against the Bulls but he has slowly rehabbed his way back to running the scout team in Orlando over the past two months.

#UCF QB McKenzie Milton shared some practice footage on his Instagram Story of him making some throws on the run… 👀 pic.twitter.com/v2vlZCvFBu

After being tackled low in the Knights’ 2018 regular-season finale, he was transported to a hospital in Tampa Bay, where he underwent surgery to repair damaged nerves and restore blood flow to his lower right leg. Don’t watch the injury if you’re squeamish, but it’s part of the story as to how incredible his comeback is.

One doctor told him that 50 percent of people who suffer the same injury have to have the injured leg amputated because the damage to the artery is too severed to restore blood flow. Milton was in a wheelchair or on crutches for the first five months after his final surgery and it wasn’t until early 2020 that he was given clearance to use a less bulky brace that allowed him to increase physical activity. Only in August did he receive the okay to return to practice.

It has been a grueling recovery process, but the Hawaiian native is ready to give his dream one final go. With Dillon Gabriel established as the starter for Central Florida, he did not want to compete with the incumbent, who also happens to be his best friend, and chose to pursue his opportunities elsewhere.

“I know my clock is ticking,” Milton said to ESPN. “I’ve only got one more year to play, and the momentum Dillon has, I wouldn’t want any controversy in the locker room. He’s earned the right to be the starter here at UCF. I see that, and I feel it’s best for both UCF and myself that I move on elsewhere. I’m trying to chase the dream of playing in the NFL, so I’ve got to give myself the best opportunity to do that.”

Prior to his injury, Milton was a big factor in how UCF became the program it is today. His name is all over the record books. No. 10 ranks fourth all-time with 8,683 passing yards and 72 passing touchdowns and third in total offense with 9,761 yards. The duel-threat quarterback led the Knights to a Peach Bowl win over Auburn and is eager to get back on the field.

“It’s been something I’ve been thinking about since the beginning of the season -because I knew I was on track to be able to play again,” Milton said of his decision to transfer. “I came to Coach [Josh] Heupel during the bye week in November — I didn’t want to blindside him at the end of the season. ‘With the trajectory of our team, Dillon has earned the right to be our quarterback. And yet I have one shot to chase a dream.”

By all accounts, even being able to step foot on a football field again is an incredible comeback. If he can return to form, one team is going to be very excited to have his talent under center next season while the rest of the world cheers him on.