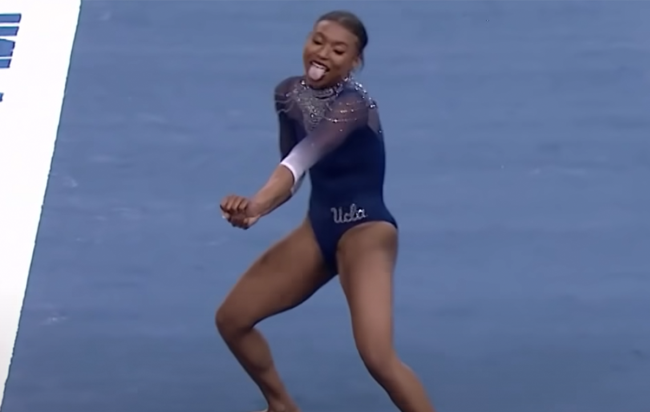 I assume I’m far from the only person who gets super into women’s gymnastics every four years only to forget about it entirely until the Summer Olympics roll around once again thanks to the likes of McKayla Maroney, Aly Raisman, and Simone Biles, who’ve provided Americans with an avalanche of national pride over the past decade.

There’s a pretty good chance I’d break my neck if I attempted something as simple as a somersault, so it’s hard not to be in awe while watching these insanely talented athletes do their thing on the balance beam and spin around in the air an impossible number of times after launching themselves off a vault.

However, I’d be lying if I said I was equally intrigued by floor routines, which I still associate with the scene from Old School despite the absurd amount of skill that gymnasts showcase while making their way around the spring-loaded surface.

The fact that most gymnasts seem to choose to perform to music put together by a European composer over a century ago is probably a factor in my comparative lack of enjoyment, as watching someone prance around to Stravinsky’s “The Rite of Spring” isn’t exactly the most electric viewing experience in the world.

With that said, some competitors are doing what they can to breathe some new life into this particular realm of the sport— including Nia Dennis, a senior at UCLA who’s made a bit of a name for herself as a member of the school’s women’s gymnastics team.

Last year, Dennis set the internet aflame when a video of her busting various moves to the music of Beyoncé began to make the rounds.

A homecoming performance that would make @Beyonce proud! @DennisNia made us lose our breath with her 9.975 on floor exercise last weekend in Pauley.

Who else is crazy in love with her routine? 😍 pic.twitter.com/XE4VvTrZOK

I’m not a member of the Beyhive, so while I obviously respect what she was able to pull off, I can’t say her music of choice really did it for me. However, as a huge hip-hop fan, I feel the polar opposite of what she decided to go with when she took to the floor over the weekend.

Instead of the vibrant violins and the cascading piano I associate with the event, Dennis went a more contemporary route with a medley of tunes from artists including 2Pac, Soulja Boy, and Kendrick Lamar, and folks, she absolutely slayed it.

Missy Elliot—who was also incorporated in the mix—gave her a shoutout on Twitter after coming across the clip, which also attracted the attention of Biles, who sang the athlete’s praises.

okay @DennisNia do the damn thing girl 🔥 this was so fun to watch! keep killing it! https://t.co/eDntwMpC4R

The 21-year-old Dennis has said she hopes to earn a spot in the Olympics one day, and if that happens, you can be damn sure I’ll be tuning in.