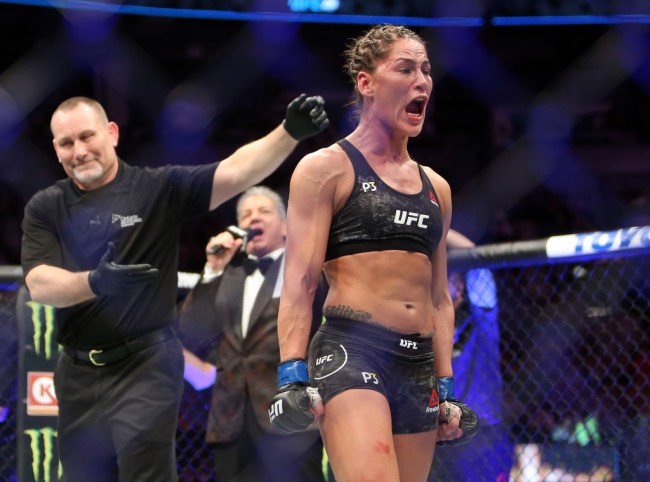 Ronda Rousey, Miesha Tate, Holly Holm, Amanda Nunes; none of these women are competing at UFC 238, and yet it still may be the very best fight card in the history of mixed martial arts. Women’s mixed martial arts, that is.

On June 8, the UFC is promoting five compelling women’s MMA bouts as part of the UFC 238 fight card, and while there have been more WMMA contests packed into a single night of fights, it’s hard to deny that this may just be the very best lineup since the UFC introduced the women’s divisions starting in February 2013.

Sitting near the top of the UFC 238 Pay Per View main card on ESPN+ is a title fight between flyweight world champion Valentina “Bullet” Shevchenko and challenger Jessica “Evil” Eye, which serves as the co-main event.

Having only lost to UFC bantamweight champion Nunes during her run inside the Octagon, Shevchenko has been stellar since moving down to flyweight, where her complete martial arts skill set thrives and her strikes land with speed and precision. Shevchenko, who won the title back in December 2018, will attempt to defend her belt for the first time, but Eye presents a unique challenge, in particular in the boxing game.

Much like Shevchenko, Eye also spent much of her career competing at 135 pounds before the UFC added the women’s flyweight division in 2017. Up at bantamweight, Eye went 1-5, with one No Contest, inside the Octagon. She was routinely oversized and overpowered by bigger women; however, since returning to flyweight, she’s looked impressive, going a perfect 3-0. Fighting in the UFC since 2013, this will be Eye’s first title shot, and in order to overcome the challenges presented by the champion, she’ll have no choice but the chase the fleet-footed Russian-Kyrgyz-Peruvian Shevchenko around the Octagon and implement her boxing and wrestling. This fight will very much resemble a bull fight, with Shevchenko playing the role of the matador, and Eye charging forward, full tilt.

Now, to better understand the context of this amazing lineup of women’s MMA fights at UFC 238, it must first be mentioned that this is not some sort of record in terms of quantity–back in December 2014, when the UFC introduced the women’s strawweight division on The Ultimate Fighter, they booked eight WMMA bouts on a single card, which still serves as the promotional record–it’s purely an examination of quality.

At this point, real punters might step in to point out that Invicta FC, an all-women’s promotion based in Kansas City, has put on deeper cards with more talent, and they might have a point. However, by now, the UFC has developed its female roster to a point that is deeper than any other fight promotion in the world, and the remaining WMMA fights on the UFC 238 card all have some significant stakes or unique international appeal, which is exactly why this is the best card in women’s MMA history.

Consider the strawweight matchup between second-ranked Tatiana Suarez and third-ranked Nina Ansaroff. Suarez, a former bronze medalist at the wrestling world championships, only began her professional MMA career in 2014, 17 months after Ronda Rousey first set foot in the Octagon. And yet, at 7-0, she’s already become the best wrestler in all of the women’s MMA, perhaps ever.

Ansaroff, who is engaged to UFC bantamweight champion Nunes, is a bit of an MMA journeywoman. But entering this fight against Suarez on a four-fight winning streak, Ansaroff’s stock has never been higher, and it’s quite likely that whoever wins this bout, which airs on ESPN, just before the UFC 238 Pay Per View main card on ESPN+, has the best claim to the next title shot at 115 pounds. Just don’t tell that to Michelle “The Karate Hottie” Waterson.

Lower on the card, there is a trio of women’s fights, including tenth-ranked Karolina Kowalkiewicz and Alexa Grasso, who sits at thirteenth in the rankings. This fight may not have the highest stakes, but both fighters have shown solid skills on the feet, and Kowalkiewicz desperately needs a win after getting brutally knocked out by champion Jessica Andrade last year and dropping a decision to Waterson in March.

There’s also strawweight matchup between Angela “Overkill” Hill and twelfth-ranked Yan XiaoNan. One of those classic striker vs. grappler bouts, this fight is not exactly what you’d expect, as Hill, an American with one of the best nicknames and Twitter games in all of MMA, is the standup fighter, while Yan, who fights out of Beijing’s China Top Team is known for her grappling, training under the tutelage of Carlson Gracie black belt Ruy Menezes.

And finally, kicking off the entire UFC 238 fight card are a pair of flyweights, as second-ranked Katlyn Chookagian, a karate specialist, takes on Muay Thai-centric Joanne “Jo Jo” Calderwood, who has been on a bit of a tear since moving up a division. Calderwood was definitely a casualty of cutting too much weight earlier in her career, and the change to flyweight has done wonders for her career. Who knows, a win over Chookagian might propel “Jo Jo” into the next title fight at 125 pounds.

So there you have it. Five quality women’s mixed martial arts fights, one for the title, a potential title-eliminator (does the UFC even do those any more? They should.), and a trio of solid matchups between veteran talent hailing from the US, Mexico, China, Poland, and Scotland.