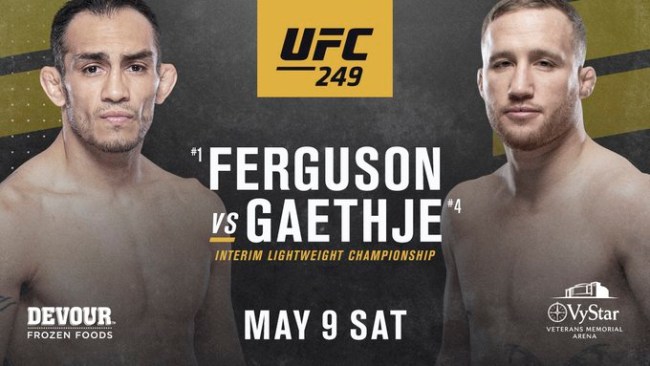 In addition to the main event of Tony Ferguson vs. Justin Gaethje, Donald Cerrone vs. Anthony Pettis will headline the preliminary fight card.

“We’re having fights May 9, then another card May 13, then May 16. We’re doing Saturday, Wednesday, Saturday. We’re gonna knock out three shows in a week,” White said while speaking to Brett Okamoto on ESPN’s Instagram Live.

Not only did White make an announcement regarding UFC 249,  but he also gave an update on “Fight Island”, saying that it should be “up and running” by June.

“Fight Island should be up and running in June. So I should be able to start running international events in June. From May 9 to May 23, we’ll knock out four shows. And then in June we can start international stuff on the island,” White said.

UFC 249, which was originally scheduled to take place on Saturday, April 18, was delayed earlier this month due to our current global situation.

White also made it clear that he’s in no rush to get fans back into arenas, as he’s currently confident the UFC can safely carry out events behind closed doors.

“I’m not in a big hurry to get fans back in the arena. I know we can do this thing safely with no fans. We have a good plan in place. I don’t know when the whole fan thing is going to start again,” he said.