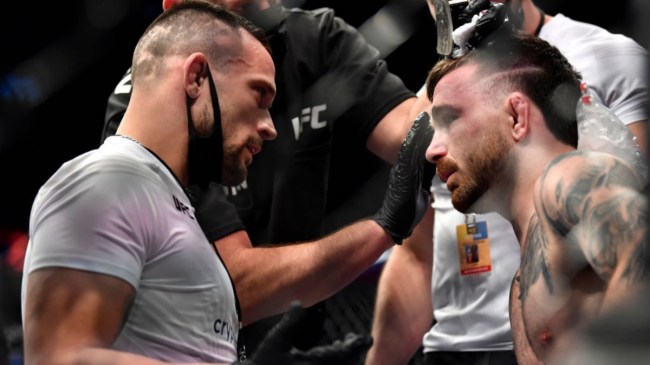 One of the UFC’s strangest stories appears to have reached a surprising conclusion.

At the beginning of last month, fight fans noticed some strange line movement on a fight between Darrick Minner and Shayilan Nuerdanbieke. Then Minner suffered a leg injury during the fight that made the line movement look even more suspicious.

It just so happened that Minner’s coach is James Krause, who is well known for gambling on UFC fights. That led fans to craft come conspiracy theories about the fight and there has since been an investigation into the fight.

UFC’s chief business officer Hunter Campbell has just informed all fighters that, effective immediately, fighters who choose to continue to be coached by James Krause or who continue to train in his gym, will not be permitted to participate in UFC events. (cont’d)

Helwani also tweeted out the full statement from the UFC that had been sent to all fighters and their camps, which revealed that Darrick Minner had also been released from the organization.

Full statement from Campbell, which was just released to all UFC fighters and their camps: pic.twitter.com/Xk05Yoc66x

This announcement from the UFC comes on the same day that Alberta became the latest jurisdiction to put a stop to UFC wagering.

Pending UFC wagers have been voided and the stake has been returned to the player.

Before this, UFC betting had been halted in Ontario and it was announced that there wouldn’t be lines available for any fights involving Krause’s fighters.

Glory MMA has a number of fighters currently competing in the organization with the most notable being former Flyweight Champion Brandon Moreno. Moreno has a title fight coming up on January 21st and it appears he will now find a new gym in the middle of his training camp for that fight.

Krause actually has a fighter competing on this weekend’s Fight Night card and the UFC has decided to allow Marcelo Rojo to fight against Francis Marshall tomorrow.

Hopefully this will at least lead to our friends up north being allowed to bet on fights again.