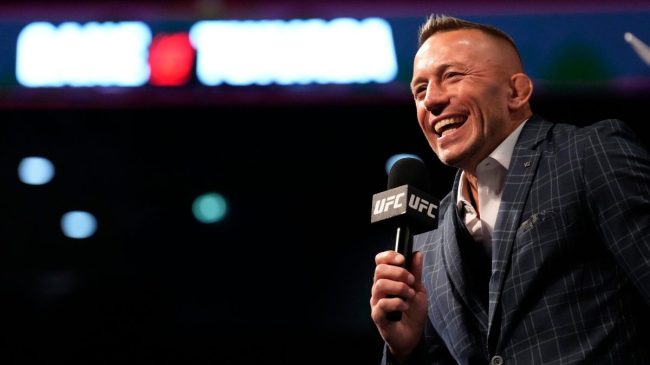 UFC Hall of Famer Georges St-Pierre has been retired from the organization for five years now. We haven’t seen him fight for quite some time as the former champion has enjoyed his time off. However, he has helped with training and things of that nature. Now, it sounds like he’s officially moving on from Dana White and the UFC for good and even hints at a possible return to fighting.

According to MMAFighting.com, Georges St-Pierre’s contract with the UFC has finally come to an end. Many fighters remain under contract even after they retire from the organization. It’s been a bit controversial, as past fighters are unable to move on with their lives during that time. However, that is no longer the case for St-Pierre.

Now, it appears he’s potentially ready to get back in the cage or ring, per MMAFighting.com. Georges St-Pierre was seen at the Jake Paul-Anderson Silva fight, commentating for Showtime. The Hall of Famer states, “I’m already out of my UFC contract. I’m out. I couldn’t be here today if I was under UFC contract. It might piss off the UFC that I’m here, but I did it because, like I said, I have the freedom now to do whatever I want, with whoever I want, whenever I want.”

Sure sounds like St-Pierre is excited about his future. He goes on to claim, “If I wanted to [I could compete in boxing]. You never say never. If it’s for a good cause, it’s well organized, who knows? I could do boxing or grappling. Who knows? But my days of trying to prove I’m the strongest man in the world, it’s gone. I have other priorities in life and I’m still training, I’m still getting it. When I go with a guy, when I spar with a guy, I still get it. But my heart is not there anymore.”

So, we may see St-Pierre in some exhibition matches down the road. However, it sounds like he’s moved on from legitimate competition. Even so, we’re excited to see what lies in Georges St-Pierre’s future now that he’s free of his UFC contract.