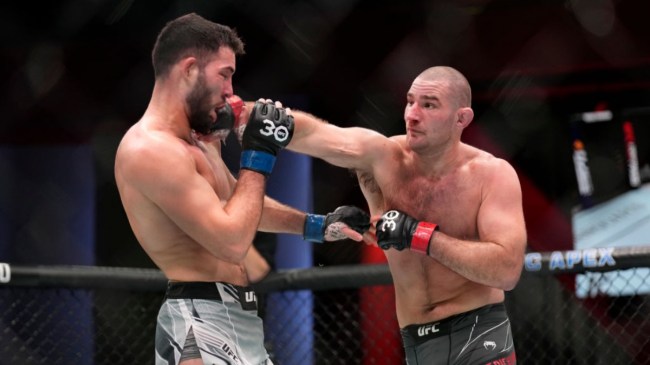 The MMA world is never short on wild stories.

It’s something you kind of just begin to accept the longer you follow the sport.

We’re talking about a sport that once saw a 600-pound man lose by TKO in the UFC and then win his next fight by smothering his opponent into submission.

It’s a strange place sometimes and if you spend enough time on MMA Twitter, you find out just how strange it can get.

Twitter is where the latest strange drama in MMA comes from.

One interesting personality the sport has inexplicably attracted recently is Dale Brown, the self-defense “guru” from Detroit Urban Survival Training.

Dale has recently gotten attention on social media because people have been absolutely roasting his techniques.

That led to UFC middleweight Joaquin Buckley visiting Brown’s gym last year and even having Brown in his corner for a fight against Abdul Razak Alhassan.

This week, another UFC middleweight decided to visit the gym.

That was Sean Strickland, who won in last weekend’s main event.

The visit didn’t go well for Brown and his techniques.

Sean Strickland showed up at the D.U.S.T. Self defense facilitypic.twitter.com/8tPuov8yVL

Following the visit, it seems Brown had a lot to say about Strickland. He brought up the idea of fighting Strickland in the desert with nobody around but the cameraman.

The idea clearly interested Strickland, who proceeded to offer to pay for Brown’s transportation and hotel and put $200K on the line in the fight.

Sean Strickland offers Dale from D.U.S.T a free flight, hotel and 200k to fight him in the desert 😂 pic.twitter.com/6CP4pLQdUo

Strickland might not have the world’s most exciting or intimidating fighting style, but he also probably isn’t somebody that you want to fight in the desert for any amount of money.

Dale Brown should probably stick to teaching his questionable self-defense techniques and try to stay off the radar of anybody in the UFC that might fight him.