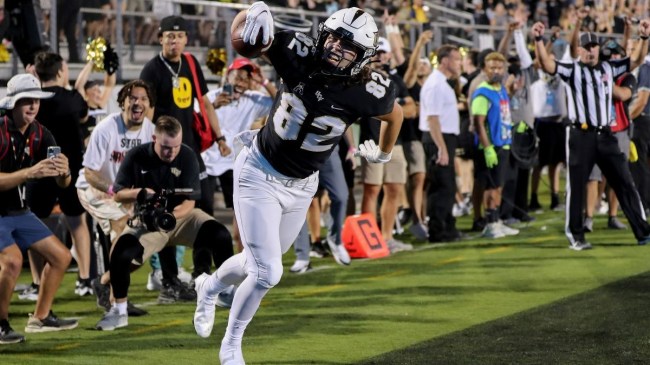 The UCF Golden Knights have had a pretty strong 2022 college football season in their second year under head coach Gus Malzahn. The Knights entered Saturday’s War on I-4 rivalry game against Central Florida with an 8-3 record and one foot in the American Athletic Conference championship game.

That looked like a mere formality early in the game. The Knights raced out to a 28-0 lead midway through the second quarter and it appeared the route was on. But USF slowly but surely worked its way back into the ball game. A 2-yard touchdown pass from Byrum Brown to Sean Atkins made it 28-7 at the half and gave the Bulls a glimmer of hope.

After a field goal made it 31-7 in favor of the Knights, USF ripped off 22 consecutive points to end the third quarter and pull within two points at 31-29.

The Bulls then took an improbably 39-38 lead with 7:07 remaining when Brown took off for a 42-yard scamper. Suddenly, a walk in the park for UCF had turned into an absolute nightmare against its biggest rivals.

But the Knights didn’t back down. Instead, they marched right down the field and on third-and-8 from USF 14-yard line, quarterback Mikey Keane threw the ball up for tight end Alec Holler in the front corner of the end zone.

What happened next was something you have to see to believe.

Holler went up, reached out his big right hand and snagged the ball out of the air, just getting a knee down before going out of the bounds. It was the 6-foot-3, 230-pound senior’s first touchdown of the season. It may also be the most important catch he makes in his career.

The Knights went on to win 46-39 and will play Tulane in next week’s AAC title game with a likely Cotton Bowl spot on the line.