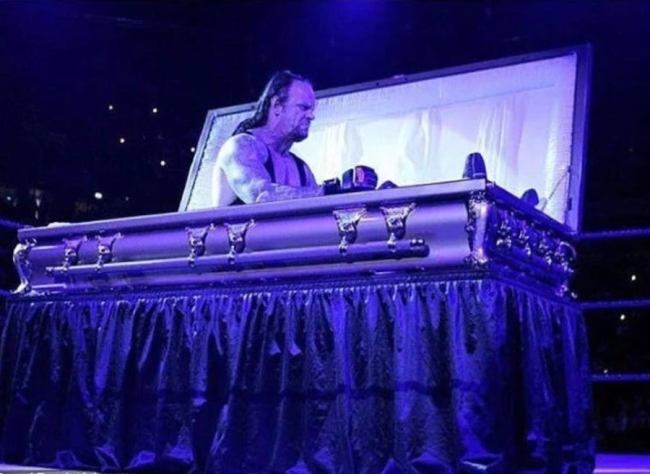 This Sunday at Survivor Series, the WWE will say farewell to The Undertaker. Sure, he’ll still make random appearances, but the man behind the gimmick said he’s done being an in-ring performer.

The company is running a “30 Days of The Undertaker” event on the WWE Network and released new documentaries and interviews about the legendary performer and his career.

Close friends have also been sharing stories about Taker’s career in interviews.

One of The Undertaker’s closest friends in the business, JBL, recently talked to Dr. Chris Featherstone on Unskripted over at Sportskeeda and shared stories about “The Phenom” in his younger days in the business.

One story involved The Undertaker partying a little too hard the night before an event.

“He came in and had a few drinks the night before. He never sold, he never sold anything. He was legendary for never selling anything,” JBL remembered.

The story goes that The Undertaker needed a quick nap to shake off the effects of the night before but didn’t want to get caught sleeping at work, either by the boys or by management.

This particular nap helped to put over the fact that The Undertaker really did live the gimmick.

“So, he wanted to take a nap and wasn’t about to do it in the dressing room – that was back before these guys had buses and he didn’t want to go out to his car because somebody would see him.

So, he crawls into one of his own coffins and takes a nap.

He says when he wakes up and opens up the coffin lid – because it’s not built for air, it’s pretty hot in there apparently – he opened up the casket and there were people all around the caskets just standing there.

They’d come up since he had gotten in there.

So, he sat up, got out, and walked out and just kept going.

Hopefully, more of these stories come out in the next few months and weeks. Especially with The Undertaker not being as protective of his character anymore and doing press appearances and interviews.

I know a certain podcast that would love to have him on as a guest. Hint. Hint.