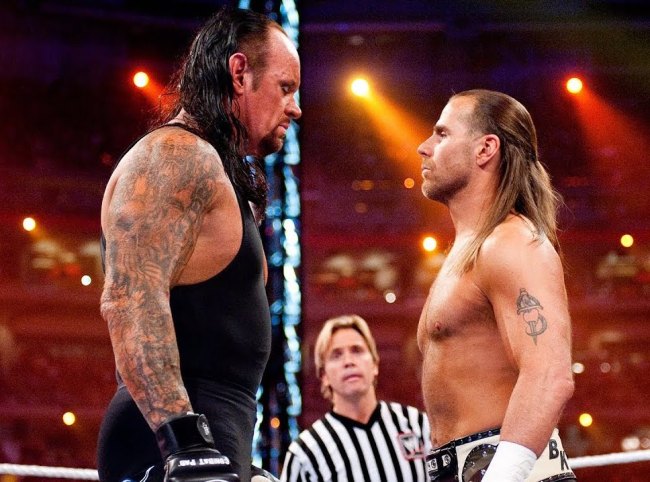 The Undertaker and Shawn Michaels have faced off in several classic matches over the years. The pair are good friends now, but Michaels was often difficult to work with during the mid-90s.

Michaels often refused to do the job for some performers, and many thought this would be the case when the “The Heartbreak Kid” took on “Stone Cold” Steve Austin at WrestleMania 14.

This match happened just months after the infamous “Montreal Screwjob,” so The Undertaker had every reason not to trust Michaels.

The legend goes that the word got back to The Undertaker that Michaels might refuse to drop the heavyweight championship and might change the finish in the middle of the match.

On the “Something To Wrestle With” podcast with Bruce Prichard, the former Brother Love recalls that after his match with Kane, The Undertaker sat backstage ing the Gorilla position (the seat right behind the curtain) and started wrapping his hands while staring at Michaels before he made his way to the ring.

In a recent interview with the New York Post, The Undertaker discussed the rumor about him being ready to fight Michaels in the back.

“Shawn, everyone knows the story, is supposed to drop the belt to Steve. Shawn was being Shawn in my opinion, and like I didn’t know if he was gonna do it. My intention was to make sure one way or another business was done that night.”

The Undertaker admits the rumor to be true and doesn’t really feel bad about the incident.

However, The Undertaker does feel a little guilty about lying about Shawn Michaels about the rumor, years later, after the pair worked out all their differences.

“I felt so bad because our relationship had changed so much that he goes, ‘Were you really gonna beat me up?’ ” Undertaker said. “I was like, ‘No man that’s just all rumor. Taping my hands up and everything, come on.’

He goes, ‘I didn’t think so. I mean that really didn’t sound like you.’

“The whole time in my head I’m like, ‘I was gonna smash you if you didn’t drop that belt to Steve.’ But yeah, he’s a completely different person, I love him to death now. But, yeah, that’s the story. I was sitting there hands taped ready to do whatever I needed to be done.”

During an interview with “Inside the Ropes” back in 2018, Michaels claims he never saw Undertaker before his match at WrestleMania 14 and “there is absolutely no truth to that whatsoever” to the story about Taker staring him down while taping his fists.