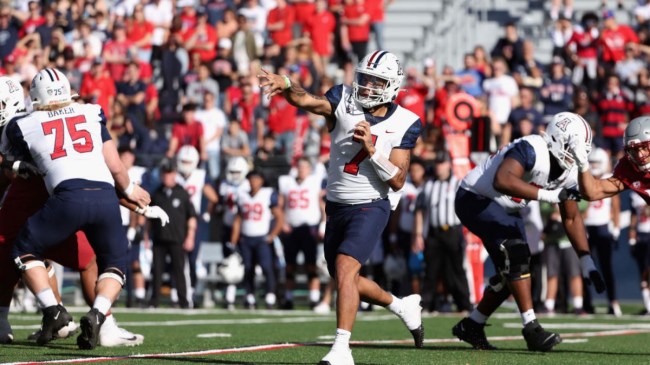 This season’s University of Arizona football team was the best that their fans had seen in years. They managed to pick up wins over San Diego State, North Dakota State, and Colorado early in the year and remained mostly competitive with the rest of the conference in the middle of their schedule.

Last week, they had their best performance of the year, going to California and beating UCLA to end their hopes of a spot in the College Football Playoffs. Their rewards was that they would still have a chance at qualifying for a bowl game with 2 games left in their season.

All they had to do was beat Washington State at home and then follow it up with a win at home against Arizona State during Rivalry Week.

Unfortunately for the Wildcats, those hopes were dashed today. Arizona was dominated by Washington State in a game where they only scored 6 points in the first half and trailed by 25 points at the end of the 3rd quarter.

To make matters worse, it seems there was some tension on the sideline during the loss. During the game, starting quarterback Jayden de Laura and receiver Dorian Singer got into a scuffle on the sideline where de Laura shoved Singer and the two had to be separated.

Heated exchange on the Arizona sideline😳

This seems to be one of the rare occasions this season where these two weren’t on the same page. They had connected for 54 catches, 838 yards, and 5 touchdowns before today and Singer had 9 catches for 176 yards and a touchdown today even in the loss.

Now they’ll have to get themselves back on the same page quickly as they have the opportunity on Friday to win the Territorial Cup for the first time since 2016 if they can bounce back from this disappointing performance.