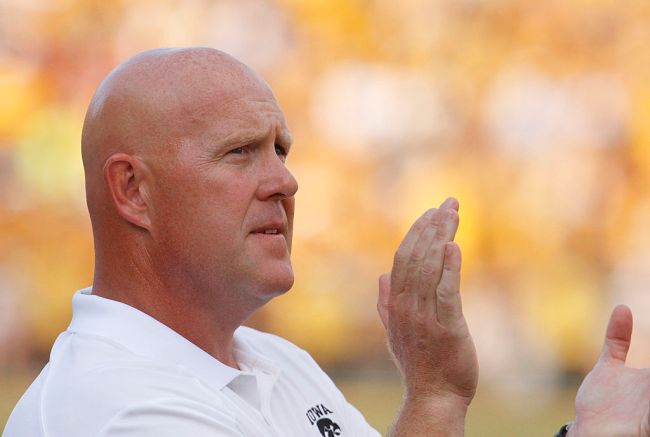 Chris Doyle was fired as Iowa’s strength and conditioning coach in June of 2020 after being accused of making racist remarks and bullying players but now has been given what is essentially a promotion, as Urban Meyer has hired him to his Jacksonville Jaguars staff. Doyle will serve as the Jags’ director of sports performance.

Doyle had been Iowa’s director of strength and conditioning coach since 1999, but over the past year, a number of football players have accused the 52-year-old of using racist language and treating players differently based on their race.

“I remember whenever walking into the facility it would be difficult for black players to walk around the facility and be themselves,” former Iowa defensive back Amani Hooker said on Twitter when Doyle’s allegations first came to light. “As if the way you grew up was the wrong way or wasn’t acceptable & that you would be judge by that and it would impact playing time.”

Hooker was one of many former Iowa players to take to Twitter to share their stories involving Doyle.

Former #Hawkeyes have taken to Twitter in the last 24 hours to shed some light on what it's like to be a person of color on the Iowa football team. pic.twitter.com/3xTmwhCggo

Meyer explained that he had some intense conversations with Doyle before hiring him and that he’s confident there will be no issues with him in Jacksonville.

“I vet everyone on our staff and, like I said, the relationship goes back close to 20 years and a lot of hard questions asked, a lot of vetting involved with all our staff,” Meyer said, according to ESPN. “We did a very good job vetting that one.

“… I met with our staff and I’m going to be very transparent with all the players like I am with everything. I’ll listen closely and learn and also there’s going to have to be some trust in their head coach that we’re going to give them the very best of the best, and time will tell. … The allegations that took place, I will say [to the players] I vetted him. I know the person for close to 20 years and I can assure them there will be nothing of any sort in the Jaguar facility.”

ESPN’s Marcus Spears sounded off about the hiring during a segment on NFL Live on Thursday.

“How tone-deaf do you have to be to hire a guy in this time in the country, in this league, with the things we’ve been dealing with.”

Marcus Spears and the NFL Live crew were vocal and candid about their disappointment in Jacksonville’s hiring of Chris Doyle. pic.twitter.com/jdD1TUFcgn

Meyer is entering his first year as the Jaguars’ head coach after stepping away from coaching for a few years while this will also be Doyle’s first opportunity in the NFL as well.

UPDATE: Following the criticism of his hire, Doyle reportedly resigned from his position with the Jaguars one day after the announcement of his hiring.