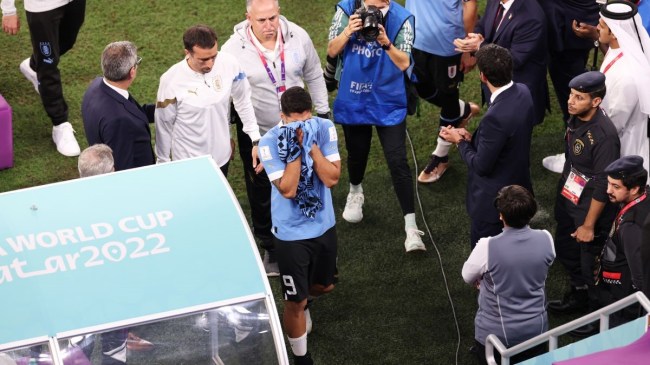 Uruguay is one of the most storied nations in FIFA World Cup history. The country both hosted and won the inaugural FIFA World Cup in 1930 and then won it again in Brazil in 1950.

And the Uruguayan team was not happy about it.

Uruguay entered Friday’s third and final Group H match needing a win against Ghana and some help from Portugal against South Korea to advance. A win by the Uruguayans and a loss or draw for South Korea would seem them through. If South Korea beat Portugal, Uruguay would have to have a better goal differential to advance on a tiebreaker.

Uruguay took care of its part of the bargain, topping Ghana 2-0. But South Korea scored a dramatic, stoppage time winner again Portugal to advance on the third tiebreaker, goals scored.

Definitely turn your sound up for this 🔊🆙

But the Uruguayans felt they should have been awarded a penalty kick late in the match. If they had scored it, they would have won 3-0 and advanced via the second tiebreaker, goal differential. Instead, they were eliminated.

Uruguay Players Put Hands Off Referee After Elimination, Follow Him Down The Tunnel

The Uruguay players were devastated after the match and took their frustrations out on referee Daniel Siebert, even going so far as to follow him down the tunnel after the match.

Suarez was emotional after the final whistle pic.twitter.com/aNApvOhtmA

Uruguay players follow the game officials into the tunnel after the final whistle pic.twitter.com/bVCIXKM2RW

Fans were furious with the Uruguayan players after the display.

Ref: “I do not apologize for making the right call. Maybe score and don’t depend on a PK shout. Safe travels” https://t.co/SYlNrD0nA2

Keep your hands off the officials. And what are you hoping to accomplish after the game is over anyway? These jokers need a ban. https://t.co/xG4eGIOQ2M

South Korea will now take on likely Group G winner Brazil in the Round of 16 barring something insane in the afternoon games. While Portugal, even despite the loss, advances as the winner of Group H.