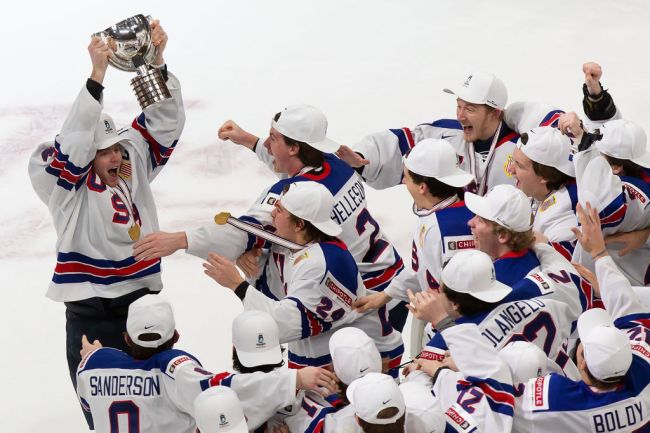 USA hockey backed up its smack-talk with a dominant 2-0 win over Canada in the World Junior Championships final on Tuesday night. The Americans set the tone for the gold medal match in pregame with some serious *sniff* pregame smack-talk. It was the Trevar Zegras show all night (really all tournament) and he got things going by dissing Canada’s path to a second place finish.

Before tonight’s game against Canada, Trevor Zegras was talking BIG talk in pregame. He just scored to put the USA ahead 2-0 in the second period. #WorldJuniors pic.twitter.com/zdqwzvZFkJ

The Canadians went undefeated on their home ice beating Germany, Slovakia, Switzerland, Finland, the Czech Republic and Russia by a combined score of 41-4. Zegras was unimpressed. Team USA lost to a fourth-place Russia team to open pool play 5-3 but won its next five against Austria, the Czechs, Sweden, Slovakia and Finland (bronze medalists) 30-5. Tuesday continued that trend. The boys were buzzing and came out wearing the classic sweaters.

Things got going right away and Canada couldn’t clear numerous loose pucks on the boards. Alex Turcotte opened the scoring and redirected a Drew Helleson shot into the back of the net with just over 6:30 remaining in the first period to give his opponents their first deficit of the tournament.

Turcotte had to leave the ice later in the game after a spill, but he finished the game. He had a slow start to the Juniors but turned it into high gear down the stretch and carried his line. Tough dude.

Here's another look at what happened to Alex Turcotte.

He's back out there now.
🎥 @TSN_Sports pic.twitter.com/hIaNRNQUvm

Anaheim’s electric prospect backed up his early chatter and turned the lead over to his goalkeeper. The Canadians fell behind 0-2 against Russia in the 2020 World Juniors final and battled back to win, so no lead was safe.

Spencer Knight was up to the task and perfect between the pipes. He recorded the first shutout medal game in USA Hockey history and the first in a gold medal match since Sweden in 2012. Canada out-shot the United States by 13, but the only ones that go matter. Knight was the player of the game and made his most ridiculous save late in the third period.

With just about two minutes left and little hope, Canada started getting frustrated.

The home country was forced to quarantine in individual hotel rooms for 14 days after a COVID-19 outbreak in early December. It was a weird year and the game meant a little bit more for both teams, especially with how loud and the Americans were playing leading up to the tournament. Canada owns the all-time World Juniors record between the two, but the United State is 3-1 against their northernly neighbors in gold-medal games.

You can feel the heartbreak for team Canada 💔 pic.twitter.com/BTCA0jr4jD

On the other side of the ice, it was celly season.

Every player, coach and staff member on each team receive a medal, whether silver or gold, and birthday boy Cam York was in charge of distribution. Head coach Nate Leaman made history by winning a gold medal to match his NCAA championship at Providence, becoming only the third coach to do win both tournaments. He brought his director of ops Theresa Feaster with him to the Great White North as a coach. Feaster, the daughter of former Tampa Bay lighting general manager Jay Feaster, became the first female assistant in team USA history and the first female assistant to win gold at World Juniors.

As is tradition, the night ended with the signing of the victor’s national anthem.

Nothing better than winning gold and singing the national anthem (even if you sing a little ahead). #usawjc @NHLNetwork @usahockey 🏆🇺🇸 pic.twitter.com/hpiBPYpWDj

Even if it was out of sync, it was loud and proud.