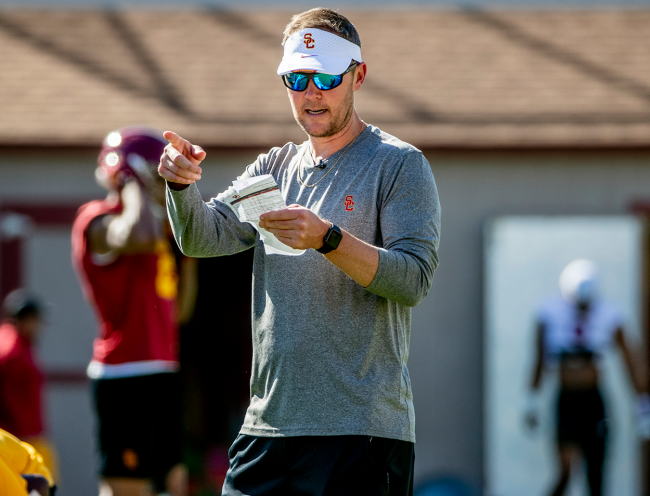 The new era of USC football has arrived and all signs point toward it being a successful one. After hiring Lincoln Riley as head coach in November, the Trojans are aiming to return to national relevance — and reach the College Football Playoff — following years of mediocrity and disappointment.

With the former Oklahoma Sooners head coach in Los Angeles, things are already looking completely different. Not only is the nation’s second-best transfer portal class is settling in and the roster is starting to take shape, but the system is getting an overhaul.

Harrell and Riley both run an Air Raid system. They both lean heavily on the passing game and use the run to keep the defense honest. Neither of them shy away from running the ball, but they are two deep-ball-loving offensive coaches.

Despite the similarities between what Harrell ran at USC last season and what Riley will run there now, there are big differences. Harrell’s scheme is very simple, while Riley’s system has more intricacy to it.

Particularly at running back.

After offseason turnover, USC’s backfield is stacked. The Trojans added two staring Pac-12 backs through the transfer portal and, as a result, Darwin Barlow is the only remaining scholarship back still at USC from a year ago.

Despite the competition for carries, Barlow is thrilled with how things look under Riley.

During seven years at Oklahoma, Riley had six 1,000-yard backs. He also uses his running backs in all-purpose roles and in a variety of different ways.

As a result, he and his fellow backfield mates, as well as the entire offensive roster, have a lot to learn. The playbook is much more complex than it was a year ago.

While discussing the difference between the 2021 offense and the 2022 offense, Barlow took a jab at Harrell and his system. He made it very clear that things are a lot more definitive and compound this year.

This quote from USC RB Darwin Barlow last night really said it all about the difference with Lincoln Riley’s offense:

"Me and my homeboys were joking in the running back room the other day, if you didn’t know the play, you could just run a swing last year. Now, you gotta know."

Clearly things are going to look different in Los Angeles this fall. Only time will tell if the new offense leads to greater success, but it’s hard not to imagine the Pac-12 running through USC for the foreseeable future.