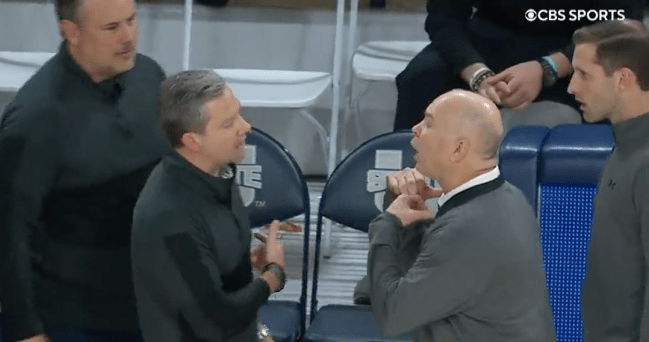 Last night’s game between Utah State and Saint Mary’s ended in unique fashion and Gaels head coach Randy Bennett was NOT happy. After the game, Bennett accosted Aggies head coach Ryan Odom in the handshake line and threw a hilarious tantrum on his way out of the stadium.

The game got off to a very slow start in the first half. Utah State held a 20-16 lead at the break.

Pace picked up in the second half and both teams went back-and-forth trading buckets. With 49.1 seconds left, the game was tied at 58.

Despite a lack of extra motivation from caffeine or spirits, the Aggies crowd was going absolutely bonkers. It was a raucous environment as the game came down to the final minute.

THE VIBES WHEN IT'S A TIE GAME WITH 49 SECONDS LEFT! @USUBasketball pic.twitter.com/vryfXzlRKa

The excitement quickly turned to frustration and disappointment.

After squandering an opportunity to win the game, the Aggies committed a foul with 0.9 seconds remaining. It was one of those calls that could have gone either way.

OMG! A FOUL ON JUSTIN BEAN WITH 0.9 TO GO 😱@saintmaryshoops at the line. pic.twitter.com/iSUaYKGe3H

Utah State was in the bonus and as a result of the foul, Saint Mary’s went to the free throw line with a chance to win the game. Junior guard Alex Ducas stepped up to the charity stripe and knocked down both attempts.

And then the chaos continued.

The Aggies had the ball with 0.6 seconds left and failed to secure the inbound pass. However, the clock never started.

The game was ultimately ruled over and Saint Mary’s escaped with a two-point win. And yet, for some reason, Bennett was fuming.

After the the whistle blew, Bennett walked over to the handshake line and discussed what happened with Odom. Clearly, the two disagreed.

Bennett, clearly angry, went to shake Odom’s hand. Odom, who was also visibly angry with the result, did not return the handshake.

As a result, Bennett stormed off into the tunnel and fired up the opposing crowd on his way out. After a game that his team won!

The best part of the interaction comes after Bennett takes off toward the locker room. Odom looks at the Saint Mary’s assistants and points back at Bennett, being like “somebody tell that man to calm down.”

The hilarious tantrum made very little sense because, again, his team won the game. And yet, it was remarkably entertaining.