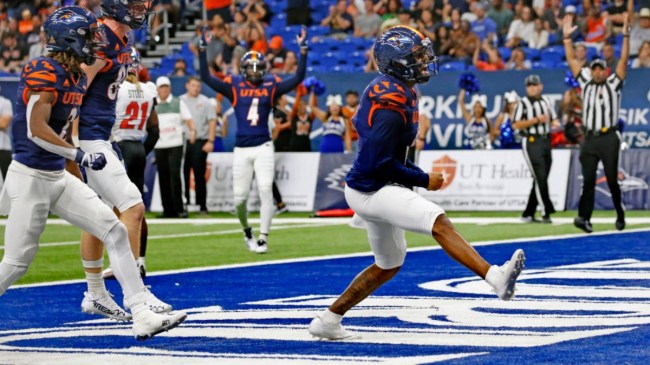 With changes to eligibility rules in college sports in recent years, it has become possible for athletes to put together pretty long careers at the collegiate level.

There may not be a better example of this than UTSA’s Frank Harris.

Harris has already had a long career at UTSA. His freshman season came all the way back in 2017. He redshirted that season and then missed his entire 2nd season in college with an injury, leading to another redshirt.

In year 3 he took over the starting job, but was injured after just 4 games.

Since returning from that injury, Harris has held the starting job for 3 years, leading the Roadrunners to a bowl game in each of those 3 seasons and getting them into the Top 25 in 2 of those seasons.

Now he has decided that he wants to try and do it all again next year as Harris has announced that he’ll be returning to UTSA next season for his 7th year with the team.

UTSA quarterback Frank Harris announces that he is returning to the Roadrunners for the 2023 season: "I just think it’s best for me to come back for one more season at UTSA and lead them into the AAC." pic.twitter.com/loqi3PbXdB

This is a very tough time,” Harris said. “I talk a lot of time, I’m praying, I’m talking with my family and I just think it’s best for me to come back one more season at UTSA and lead them to the AAC and I’m excited for it. Definitely appreciate all the support from our fans and I love the city of San Antonio and I wasn’t ready to leave yet. I love all the support, I love everybody in the city and I’m just blessed to be the quarterback at UTSA.

Thank y’all once again. I’m back for my seventh year. Let’s go!

Harris has been great for UTSA this season, racking up 3865 passing yards and 31 touchdowns while completing 71.1% of his pass attempts. Next Friday he’ll lead the Roadrunners against Toy in the Cure Bowl and UTSA fans will be happy to know it won’t be the last time they see him under center.