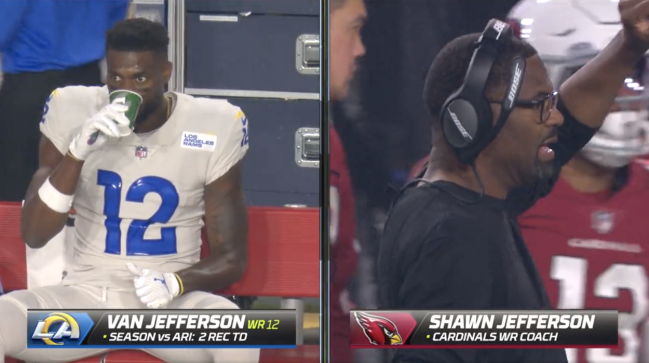 The next time that Van Jefferson and his father Shawn get together for dinner, a touchdown on Monday night is sure to be a topic of conversation. The younger Jefferson will hold bragging rights against his dad until the next time that the Cardinals and Rams face one another.

Early in the third quarter of Monday Night Football, Los Angeles had the ball around midfield with the score tied at 13. Quarterback Matthew Stafford dropped back, ran the play action, and rolled to his left.

After setting his feet at his own 40-yard-line, Stafford cocked back and unloaded across the middle. On the other end of the deep ball, his receiver was streaking across the middle and had a step on his defender.

That receiver was Jefferson, who caught the ball at the one-yard-line and crossed the goal line for the touchdown. His speed to get open was remarkable and he burnt everybody in the process.

While a father would typically be thrilled to see his offspring find the end zone, Shawn Jefferson was not. He is the receivers coach for Arizona and his son just took the lead against him.

His reaction was anything but cheerful and rather comical.

Shawn Jefferson is the @AZCardinals’ WR coach and he just watched his son @VanJefferson12 score a 52-yard TD.

Shawn played 13 years in the NFL and has coached with the Lions, Titans, Dolphins and Cardinals since 2006. This is his first season with Arizona and Monday marked the second time this season that he was on the sideline across from his son, who was drafted in 2020.

In both instances, Van caught a touchdown. However, with the Los Angeles win on Monday, both father and son have a win against one another.