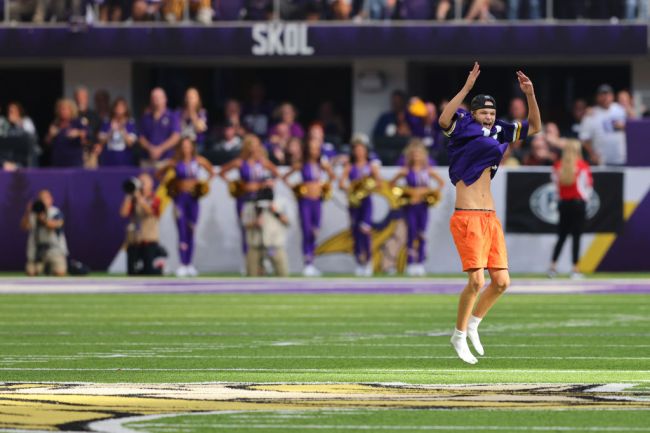 The Vikings took a four-point lead over the Seahawks to the locker room at halftime on Sunday. Despite the exciting, back-and-forth game, one fan decided that the entertainment value needed to step up a notch.

He decided to take matters into his own hands, hopped from the stands to the field, and went streaking. The term “streaking” is used a lot more loosely these days, and the rogue fan was fully clothed.

Nevertheless, it made for a rather entertaining sequence of events.

The Minnesota fan, wearing what appears to be an outdated Stefon Diggs jersey, ran out to the middle of the field around the 20-yard-line. With four security guards chasing him, he cut back and ran toward the sideline.

At that point, around the near-side of the 30-yard-line, a security guard made an effort to bring him down. The fan proceeded to put a nasty juke on his pursuer and brought the guard to the ground.

During the juke, the streaker got snagged by the turf monster and it caused him to fall as well. However, the fan made a remarkably athletic recovery to somersault back to his feet and out-run another guard.

Just as it looks like he might have had a chance to get back to the stands, a fifth and final guard comes flying in to clean things up.

The guard, coming full-steam downfield, rocked the streaker’s world and LEVELED him to the turf.

The streaker made a valiant effort and put the first security guard on skates, but, once again, “the man” won in the end.