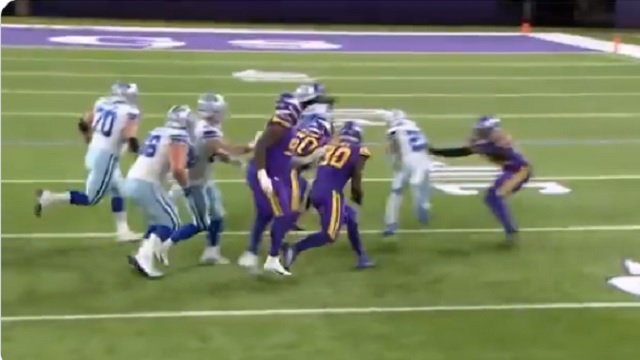 Vikings cornerback Chirs Jones is persona non grata in Minnesota after the team’s loss against the Cowboys.

On the play, Jones could be seen making an extremely poor tacke attempt that allowed Pollard to break free for his long run.

Watch Vikings Chris Jones (26). He had no desire to tackle Tony Pollard on this TD run. pic.twitter.com/KUJCuw4T5p

The Cowboys went on to win the game by three points and Vikings fans blamed Jones for the loss.

If the #Vikings miss the playoffs by one game, a defining moment will be reserve cornerback Chris Jones playing matador on a long touchdown run in the fourth quarter. @SouhanStrib writes: https://t.co/rFGsL0GxSC pic.twitter.com/HS7M9IQb9A

Vikings should cut Chris Jones after that

Chris Jones needs to be cut for that play

Cut Chris Jones. What a pathetic attempt at tackling.

His lack of effort cost his team 8 points. #Vikings #Skol