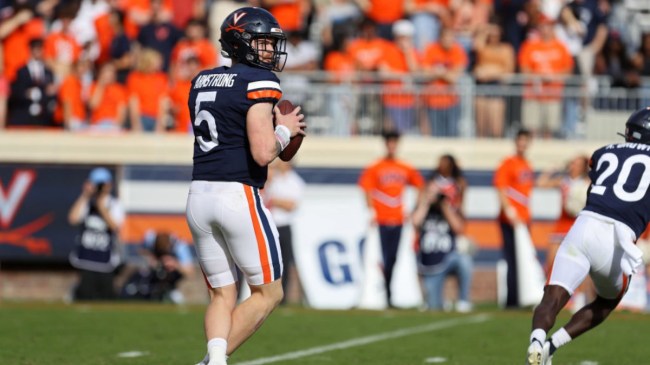 This season has been one to forget for Virginia’s football program. A bad offense has made them tough to watch and has been tough to overcome. The Cavaliers currently find themselves at the bottom of the ACC with a 3-6 record.

Today’s matchup against Pitt hasn’t been another rough one for Virginia.

The game couldn’t have gotten off to a worse start for the Cavaliers. They started the game at their own 25-yard line after taking a touchback on the opening kickoff. Quarterback Brennan Armstrong dropped back to pass on their first play, and threw a pick-6, giving Pitt the lead just 5 seconds into the game.

Pitt (-5.5) picks of Brennan Armstrong and runs it in for six on the 1st play of the game
pic.twitter.com/qem60GMv6n

Then things got worse. Virginia took another touchback on the ensuing kickoff and then proceeded to once again put the ball in the hands of their struggling quarterback. The results weren’t any better the second time.

Armstrong threw another interception on his second pass attempt of the game and Pitt returned this one 39 yards, once again to the house.

With those two throws, Virginia trailed Pitt 14-0 in just 16 seconds despite starting the game with the ball. It’s difficult to imagine a game starting any worse for a team, especially in front of their home crowd.

Their fortunes haven’t improved from there as Cavaliers remain scoreless at the half, trailing Pittsburgh, who will receive the 2nd half’s opening kickoff, by a score of 28-0.

Luckily for Virginia’s fans, this long season is just about ready to draw to a close with this game seemingly over at the half and only 2 more games left after.