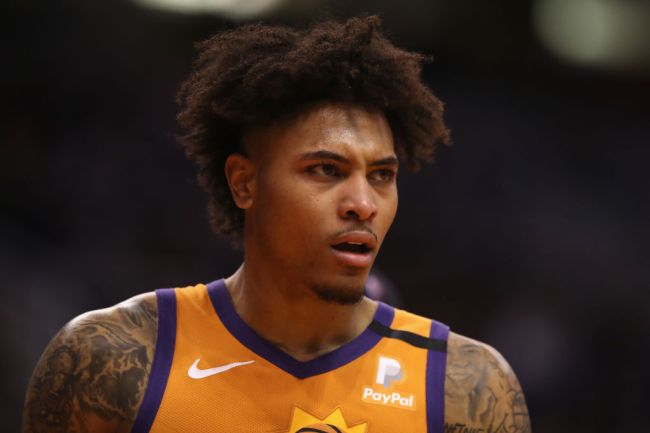 Golden State Warriors guard Kelly Oubre Jr. is accusing his ex-girlfriend of trying to extort him out of millions of dollars after they broke up.

According to a report from TMZ, Oubre has filed a lawsuit against ex-girlriend Makena LeDuff where he claims she demanded $3 million from him by the end of the week or else she would begin a smear campaign to ruin his reputation.

Makena demanded that Kelly her pay her nearly $3 million or she would make public her false, scurrilous, and extortionate allegations by the end of the week,” the lawsuit reads.

The suit claims LeDuff contacted Oubre and threatened to say he was engaged in “criminal conduct” and make other false allegations … all “crafted to cause maximum and irreparable harm to Kelly, his reputation, and his career.”

In an earlier lawsuit filed back in 2019, Oubre accused LeDuff of stealing his two dogs, slashing his tires, and refusing to leave the house he was renting in Beverly Hills following their breakup. Oubre says he still hasn’t gotten his dogs back and that LeDuff made vague physical threats against him while brandishing a rifle on social media.

Oubre first filed suit against LeDuff back in 2019 …. saying she became an absolute nightmare after they broke up. He claims she stole his 2 dogs, Soul and Saint, slashed his tires and refused to leave the house he was renting in Beverly Hills.

Kelly says he still hasn’t gotten his dogs back … and now the situation has escalated with the threats. So, his attornies amended their initial complaint … and now they’re seeking punitive damages against LeDuff.

hat’s not all — Oubre also claims Makena threatened to hurt him with a thinly veiled threat she posted on social media back in August 2019.

“Makena posted a photo on her Instagram account, where she intimated that she would take physical action against Kelly, Kelly’s friends, or anyone else that tried to enter the house to help Kelly to retrieve his things,” the lawsuit claims.

The suit continues … “Specifically, the photo showed Makena in the backyard of the Beverly Hills house, wearing one of Kelly’s favorite hats, while at the same time brandishing a rifle. In the caption, Makena wrote, ‘Exercising ALL my rights.'”

This sounds like an absolute nightmare of a breakup that could last several years.