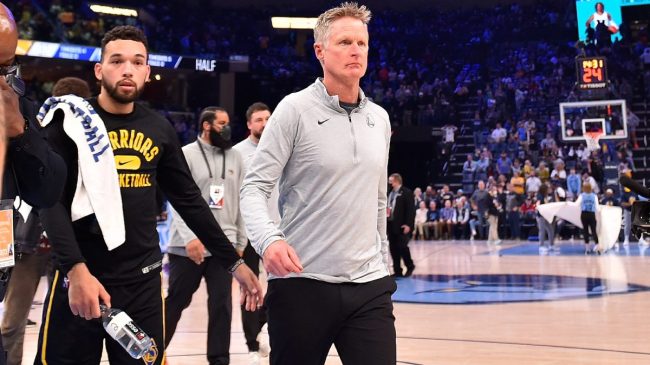 Things did not go well for Golden State on Monday night.

The Warriors fell to the Memphis Grizzlies by a score of 123-95, marking the sixth loss in their last seven games. Without top scorer Steph Curry in the lineup, Golden State struggled from the field, shooting just 31% from three-point land and scoring only 37 points in the first half.

To put that in perspective, the Grizzlies exploded for 43 points in the second quarter, alone. Memphis led by as many as 37 points in the final period.

A typically stout Golden State defense allowed a Ja Morant-less Memphis team to run the floor possession after possession in the blowout loss. The poor effort finally got to Warriors head coach Steve Kerr with his team down by 26 points at the half.

Kerr went completely mental on the officiating crew with the first half coming to a close. The outburst quickly landed the coach a double tech and ensuing ejection.

Steve Kerr was ejected at the end of the first half in Memphis pic.twitter.com/vEHasvoL9r

Kerr’s explosion on the sidelines caught the attention of viewers, and they were quick to post reactions on social media.

Twitter took off with in-game reactions to Kerr’s ejection, with some fans hilariously suggesting that he was purposely thrown out as a way to avoid the media for the postgame press conferences. Others are just bashing his coaching abilities, altogether.

Check out the response below.

Steve Kerr ejected. Down 26 at half.

Congratulations to Steve Kerr for finding a way to avoid answering questions and dealing with the media in the postgame press conference. He was ejected as the team was heading to the tunnel. pic.twitter.com/g3yLNk4sfs

Steve Kerr after realizing he can just purposely get himself ejected so people can’t blame him for them losing pic.twitter.com/8XFKRNAtfH

Steve Kerr is now afraid to speak to the media. https://t.co/trsJcCzvDK

Steve Kerr was just ejected leaving the floor at halftime. Went after the referee following what it seemed like he thought was goaltend. Two technicals. Warriors down 63-37 at halftime in Memphis. They're fading toward a 1-4 road trip.

Steve Kerr had no interest in watching his team get blown out by the Grizz https://t.co/01pIxUiS4C

Steve Kerr is the most overrated coach of all time

So Steve Kerr decided to tap out on the planned player development game, got it.

STEVE KERR IS THE MOST OVERRATED COACH IN THE HISTORY OF THE NBA.

Steve Kerr just got ejected haha. He is done watchin this beatdown

The Warriors will look to turn this losing skid around with the NBA Playoffs approaching.