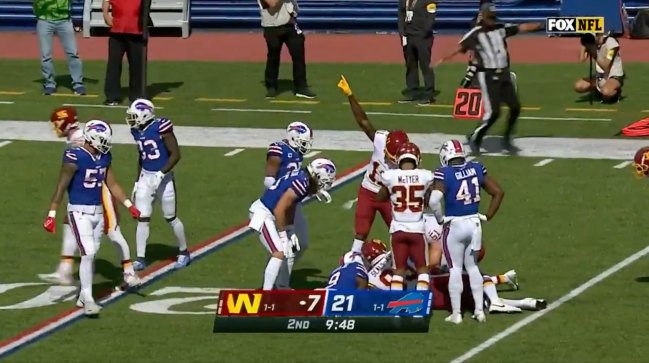 Chalk this up as something you have literally never seen before. Washington Football Team kicker Dustin Hopkins just recovered his own kickoff— and it wasn’t an onside kick.

Early in Sunday’s game against the Buffalo Bills, WFT found themselves with quite the moment swing. After falling behind 21-0 with 10:42 remaining in the second quarter, quarterback Taylor Henicke found his running back Antonio Gibson for a 73-yard touchdown.

On the ensuing kickoff, Hopkins did the inconceivable.

The 30-year-old lined up to kick it deep, but the wind had other ideas. With gusts up to 20mph in Buffalo, Hopkins sent the ball directly into the blustery conditions and had it fall short of the goal line.

As a result, the kick landed in no man’s land around the 15-yard-line and bounced directly back toward the kicking team. WFT linebacker Khaleke Hudson was in coverage and ended up being the first to the ball, but could not hold on.

The fumble went flying straight up into the air and got loose, nobody could locate the ball, and it floated directly into Hopkins’ arms at around the 24-yard-line.

Incredible play by Dustin Hopkins. Kicks it short and it bounces back towards him, gets a lucky bounce and he recovers it himself. pic.twitter.com/VXJWI7ykVE

Hopkins, who kicked the ball, took off down the field and ended up making a very easy recovery on his own kick. It was a truly strange thing that made for a tremendous play.

THE KICKER RECOVERED HIS OWN KICKOFF. #WashingtonFootball

Washington went down to score on the following drive and took a seven-point deficit into halftime.