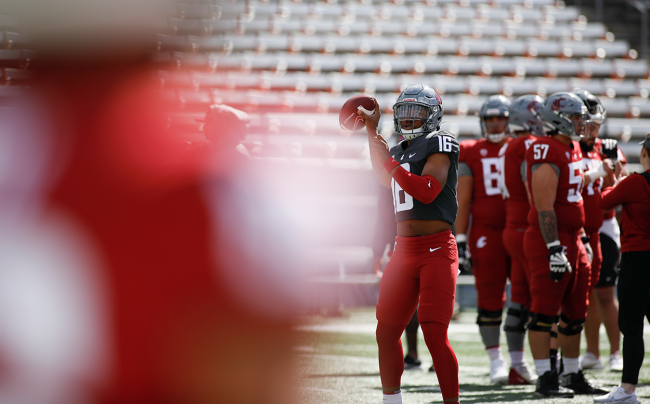 Washington State football has a new coaching staff, a new offense and a new quarterback. The Cougars welcomed FCS transfer Cameron Ward during the offseason and there is a lot of hype about the player that he could become.

Ward, who received just one scholarship offer out of high school, played in a system that rarely threw the ball. He went completely under recruited as a result and spent his first two seasons at Incarnate Word. While with the Cardinals, he was a cheat code.

After being named the best freshman on the FCS level in 2020, Ward was named the Southland Conference Offensive Player of the Year in 2021. He entered the transfer portal at the end of the season and ultimately ended up in Pullman over offers from Ole Miss, Arizona and others.

People are excited about Ward’s potential on the FBS level and he has looked impressive as both a leader and an athlete already.

Ward is also an incredible personality. He was mic’d up at fall camp on Tuesday and it resulted in hilarity. It also offered a great look at how he has acclimated to a new team and a new environment.

In addition, the video put his backup on blast. At one point during the afternoon, freshman quarterback Emmett Brown walked up to Ward and spoke into the mic about redshirt freshman Xavier Ward.

“Xavier Ward is boo’ed up, he has a girl,” Brown said as Ward came over to smack him around for blowing up his spot.

“He does, yes he does,” Ward responded as the quarterback group all laughed.

The hilarious moment starts at the 1:29 mark:

He can walk the walk, but can he talk the talk? 🎙️

Brown either blew up Ward’s spot for hiding a girlfriend from the world, or tried to get him in some trouble with the ladies that Ward has in his rotation. Either way, for Wazzu to keep that clip in the video is hilariously savage.