Holloway vs. Poirier II Is One Damn Good UFC Fight, So Don’t Sleep on UFC 236 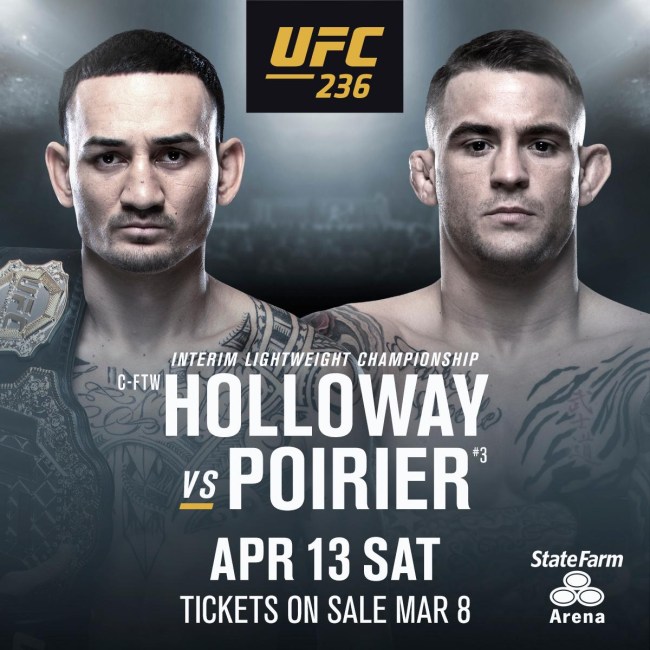 What has 40 UFC fights, 32 wins inside the Octagon, 16 knockouts and six submissions, along with 16 fight night bonuses?

It’s UFC 236 headliners Max Holloway and Dustin Poirier, you rube. Seriously, could it be anything else?

Set to square off for the UFC interim lightweight title this on Saturday, April 13, Holloway and Poirier are action fighters, like non-stop pressure in your face, throwing hella hands to the dome action fighters. They’re volume punchers and cage cutters, born finishers who know all the moves of the saviest MMA veterans, producing highlights with ease and regularity, and seven years after Poirier easily ran through Holloway in under four minutes their first bout, “Blessed” looks to stake his revenge on “The Diamond.” The only way to watch the rematch, which caps off the UFC 236 Pay Per View card, is through the ESPN+ app.

Once highly touted prospects back in 2011, Holloway and Poirier have evolved into two of the finest competitors in professional mixed martial arts. Familiar foes, but both Max and Dustin have developed, drastically, from the skinny featherweight boys who squared off at UFC 143. They’ve become older, wiser, girthier, and more experienced, and this rematch is shaping up to be one of the best fights of the year, at least when considering the back story and the resumes of both fighters.

Rifling through the stat lines, Holloway and Poirier share so many similarities. Both guys have recorded 16 wins inside the Octagon, they’ve headlined five fight cards a piece, and they’ve both faced off against notable competitors like former UFC champions Conor McGregor and Anthony Pettis, along with stalwart Cub Swanson and The Ultimate Fighter season 14 veteran Akira Corassani.

While McGregor got the best of both Holloway and Poirier, Max owns the better record against common opponents overall, but his main advantage comes in championship bouts. This will be the fifth straight title fight for Holloway, whereas Poirier is challenging for the belt for the first time.

Already the UFC featherweight champion, Max Holloway is finally stepping up to make his debut at 155 pounds, a year after a botched weight cut forced him out of a title fight with current lightweight champion Khabib Nurmagomedov.

Once on the verge of being cut from the UFC, Holloway has rattled off 13-straight wins inside the Octagon, a featherweight record. In fact, “Blessed” owns a large chunk of the featherweight record book, dominating the division for the last five years.

Finishing former featherweight G.O.A.T. Jose Aldo, not once, but twice, Holloway possesses one of the most intriguing striking games in all of MMA. He throws five and six punch combinations with relative ease, landing fists to the head and body at will, and just when you
think he’s done, Max pivots, cuts of the cage, and loads up on a new combination from a different angle. It’s some seriously advanced, high-level shit that no one else is doing these days.

Oh, and he’s also nearly impossible to take down …

Diamond in the Rough

One of the few fighters who’s been able to bring Holloway to the ground is Dustin Poirier.

A brawler, turned grappler, turned sophisticated pugilist, Poirier brings true grit and some nasty moves of his own into the fight. Poirier, who’s also a former featherweight, made the move up to 155 pounds four years ago, sick of draining himself with the brutal weight cuts.

"Against all odds. Champion of the world. No doubt."

Since jumping up to lightweight, Poirier has been nearly perfect, and in the last 17 months alone, he’s finished a trio of former world champions to earn his first title shot. Seriously, Poirier’s done it the hard way, slowly climbing up the ranks of the UFC’s toughest division. Swimming with sharks and ripping the teeth straight out many a great white.

Wait for the Finish

While both Max Holloway and Dustin Poirier have both been booked for five rounds on numerous occasions, neither has every gone the full 25 minutes, mainly because, well, they’re really good at this whole MMA thing.

Whether it’s choking dudes out, laying down the heavy artillery ground-and-pound, or forcing the cageside doctor to waive off the contest, Max and Dustin seal the deal inside the distance, which makes for the very exciting prospect that this fight will either get bloody or end violently.

It’s basically the perfect recipe for an all-out war, and a perhaps a fitting appetizer the day before Game of Thrones returns. Sort of a violence begets violence type of thing.

But hey, at least you’ll also get: