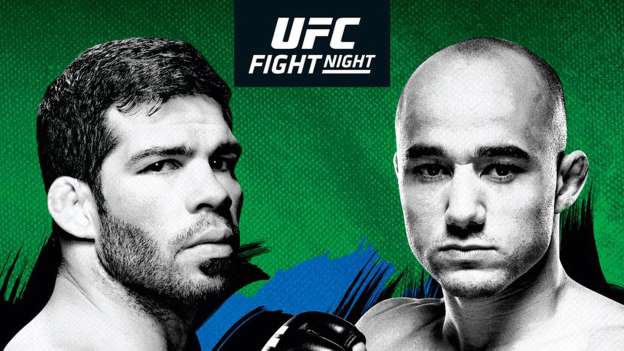 No doubt, it’s all about the Patriots versus the Rams this weekend. But unless you’re actually in Atlanta raging before Super Bowl LIII, consider staying in on Saturday night and resting up before the biggest day in sports, beer, and aggressive chicken wing eating.

While you’re at it, why not check out some killer fights on ESPN+?

In case you haven’t yet heard, the UFC inked a sweet deal with ESPN to broadcast roughly 30 events this year on the new streaming platform. This weekend’s card in Fortaleza, Brazil is a low-key firecracker of an event, chock full of fighters you may have never heard of before.

But that doesn’t mean these guys and gals can’t bang, you know, in the the martial arts sense. Headlined by top-tier bantamweights Raphael Assuncao and Marlon Moraes, UFC Fortaleza, which also features longtime featherweight king Jose Aldo (i.e. the guy who got starched by Conor McGregor in just 13 seconds), should deliver some spectacular displays of violence, along with intriguing moments of complex grappling for any resident Brazilian Jiu Jitsu nerds.

It’s the violence, however, that keeps everyone coming back for more, so before throwing down your $4.99/month subscription fee, which is less than Hulu or Spotify and includes a pretty hefty catalogue of ESPN programming, check out some of these impressive finishes from UFC Fortaleza’s combatants.

This should easily be enough evidence to convince you to sign up for ESPN+.

Fourth-ranked bantamweight contender Moraes has lived up to his “Magic” moniker of late, delivering some pretty sweet chin music. Using head kicks and heavy knees to the dome piece, Moraes has straight thrashed his last two opponents: Jimmie Rivera (seen above), and Aljamain Sterling (below). The latter of whom needed to be carted out of the Octagon on a stretcher.

Moraes is inching towards a title shot at 135, but if he’s to have any chance to fight for the belt, he’ll need to avenge his lone UFC loss against Assuncao.

Ranked third in the bantamweight division, Assuncao is 11-2 in the UFC. That’s crazy good if you don’t know too much about mixed martial arts. Seriously, that’s stupid good. Tremendous, in fact.

Not particularly known as a finisher, Assuncao does have a few solid highlights, for example, this KO of Matthew Lopez from November 2017. Right. On. The. Button.

The aforementioned Aldo returns to the Octagon for the first time since July 2018, when he crushed Jeremy Stephens with this picturesque punch to the liver. Seriously, imagine absorbing the type of damage that just shuts your body down. Actually, on second thought, don’t think about that while you’re wrist deep in chicken wings on Sunday. It’s likely bad for digestion.

The aptly named Johnny Walker also returns at UFC Fortaleza. Making his first official Octagon appearance after an impressive showing on Dana White’s Tuesday Night Contender Series, Walker blasted through Khalil Rountree last November, unleashing a series of standing hellbows, those are elbows from hell for all you newbs.

The mohawked Walker is fighting Justin Ledet, a dude with a mullet, on Saturday, and as they
say, (hair)styles make fights, so that’s a pretty cool showdown.

Not every bout on the UFC Fortaleza card features knockout specialists. There are a few of those grappling wizards fighting as well, guys like Charles Oliveira and Demian Maia.

Make History, Charles Oliveira!@CharlesDoBronxs gets another submission win, which gives him the most submission wins in UFC history! pic.twitter.com/S5DMZ9Q1MD

Again, unless you’re super into MMA fighting and the UFC, it’s likely you’ve never heard of these guys, but Oliveira is the UFC’s all-time leader in submissions with 12, and has like 13 performance of the night bonuses to his name. That means he’s basically never in a boring fight and finds a way to choke people out from all sorts of crazy angles … boa constrictor style.

One of the UFC’s elder statesmen, Maia’s entering his twelfth year with the UFC. Having lost three straight, he’s likely on his way out sooner than later, but Maia’s still a legend, a quiet throwback to the days before all the trash talk. He was always the quiet guy who let his chokes do the talking, and with nine submissions inside the Octagon, he managed to once fight Anderson Silva for the middleweight title, and challenge Tyron Woodley for the welterweight belt.

Still, it’s the knockouts we all crave, so here are two more from a pair of UFC Fortaleza undercard fighters.

Okay, that’s enough freebies for now. Enjoy these fantastic finishes on your bathroom break and then head over to ESPN+ to catch the fights live this Saturday. The main card starts at 8pm EST / 5pm PST, while the prelims kick off at 5pm EST / 2pm PST.