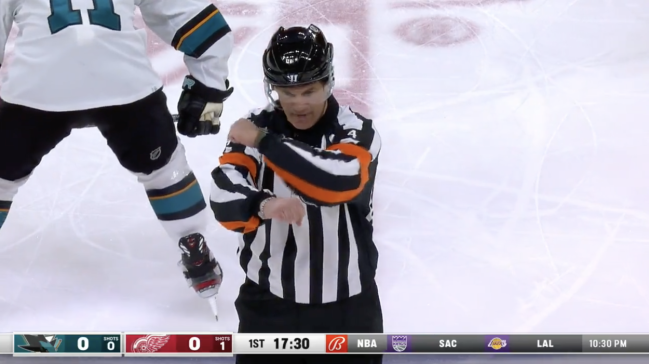 Nobody has more fun on the ice than NHL referee Wes McCauley. He is one of the rare instances of a former player becoming an official and never fails to add some flair to his job.

McCauley was drafted in the eighth round of the NHL Draft in 1990 by the Detroit Red Wings and spent much of the decade in the minor-league and international circuits. An injury forced him to retire in 1997 and he made the switch to the other side of the puck.

Since then, he has been the NHL’s coolest referee for nearly 15 years. Whenever McCauley is on the ice, there is sure to be some hilarity and excitement.

Tuesday’s game between his former franchise and San Jose was no exception.

Early in the first period, Sharks defenseman Jacob Middleton and Red Wings winger Givani Smith had themselves a scrap. That calls for a five-minute penalty for fighting.

To announce the call, McCauley skated out to center ice and did his best Bruce Buffer impression.

He said the word “fighting” with so much zest and flair that he might as well have been announcing two heavyweight MMA fighters who had just entered the octagon.

McCauley also used his hands to help spice up the call. He seamlessly transitioned from the general hand signal for fighting to a mock “put em up” action. It really tied the whole call together and reminded everyone why he’s the absolute best.

No one does it quite like Wes McCauley. 😂 pic.twitter.com/ZVno8a99jf

If you’re going to do your job, do it well. But why not have some fun in the process?